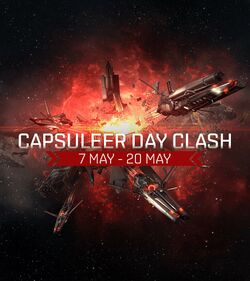 Capsuleer Day Clash was an ingame event that ran from May 7th to May 20th, 2020 for the 17th birthday of EVE Online.

Combat anomalies named 'EDENCOM Production Facility' and 'EDENCOM Research Complex' will spawn throughout New Eden, with the more advanced sites all over Lowsec, Nullsec and wormhole space. These sites strictly allow entry only for T1 and faction Battlecruisers (no cruisers or smaller allowed). These sites can be cleared for rewards..

The rats in the sites orbit at short range. Damaviks (frigates) and Kikimoras (destroyers) at 4 km, Vedmak (cruisers) at 7 km and Rodivas (cruisers) at 10 km. The NPCs employ advanced tactics and will warp around the site to get in optimal range.

Most of the rats deal pure thermal+explosive damage. But since the heavy hitting boss ships deal additional EM and kinetic damage, you should fit for omni tank. Webs are very effective in improving damage application.

The rats in the sites follow same naming convention as normal Triglavians.

This variant of the event site appears in high security space. Only T1 battlecruisers can enter the site.

The site consists of single gated deadspace pocket. Neuting in the site can be quite heavy so any active tanked ship should be fitted with plenty of surplus capacitor regen or with capacitor boosters. Alternatively a passive regen shield tank can be used to avoid capacitor issues.

Five waves of random "Jarognik" Triglavian ships will spawn with sixth boss wave. The next wave will spawn after the previous wave is destroyed. The waves do not always spawn completely at once and the next wave can start spawning while there is one ship from the previous spawn still present.

Each wave will have 3-7 random ships.

The final sixth wave is always the same. The Vedmak is the biggest threat and droips the best things, kill it first. The rodavia and damavik will warp away some time after the Damavik has been destroyed.

Like with the high-sec site, the final wave is always the same. The Vedmak is the biggest threat and droips the best things, kill it first. The rodavia and damavik will warp away some time after the Damavik has been destroyed.

Whether all the items drop in both production and research complex sites is not known.

The cerebral accelerator grade levels and their base durations for this event are: