This class will cover the mechanics of one of the most frequently used celestial objects: Gates. Most combat PvP in eve happens around gates. Gates offer hunters a bottle neck into and out of systems, but when used properly they can also offer victims a means of escape. Knowing how they work can either get you the kill or save your ship.

After jumping though a gate you get roughly 60 seconds of unbreakable cloak. Use this time. Look around, set your view point, see where other ships are and get your bearings. A lot of new and old players panic when they see flashy red then try and act without thinking. Who ever is waiting for you saw the gate flash and is already ready for you so acting fast is not going to surprise them.

Whenever your pilot changes states you get a session change timer. This prevents you from changing states again for 10 seconds. State changes include jumping, docking, entering ships, exiting ships (including being blown up) and joining/leaving or moving in fleets.

To see the timer, press escape, go to general settings and on the left side near the top is a check box called "show session-change timer" checking this box will cause a little swirly thing to show up in the upper left of your screen when you have a session timer.

It is important to be aware of this timer, if you burn back to the gate too soon you will not be able to jump and will be a sitting duck.

After performing a hostile action against any other player, you will be unable to jump through gates or dock for one minute. This is true even if the target is in your corporation.

This is separate from being criminally flagged.

The aggression mechanic is a big factor when trying to camp a gate.

Firstly, it allows the classic technique of escaping a gate camp of reapproaching the gate and jumping back through. If the entire camp warp scrambles or shoots you and you make it back to the gate then they cannot follow you until they've waited out their 60 second aggression timer, giving you plenty of time to get away on the other side.

It also means that when warping in to a gate at zero and finding a camp already on this side, you should actually not panic and jump immediately. If you do the camp will simply jump after you and tackle you on the other side. Provided you're in a ship that can tank some damage a smarter idea is to try to warp away - chances are their tackle will warp scramble you, THEN you jump. This will leave some of the camp aggressed and reduce the number of ships that can jump after you. If you're lucky and the camp is disorganised they may all aggress and you'll get away clean.

The counter to these aggression mechanics is to have multiple people and be organised. Have some tackle hold aggression so that they're able to jump and tackle on the other side.

Gate guns are set up around gates (and stations) in high sec and low sec. They will attack whoever attacks first, unless the target is an outlaw or already flagged as a criminal. The easy way to remember this is: If the target is not flashy red then the gate guns will target you. They do roughly 176 damage per volley - resistances. They also rotate between flagged targets every 30 seconds.

A third pod saving book mark can be useful as well. Because pods have such a high agility, sometimes when you warp to 0 your pod will stop just outside of jumping range, and you are a sitting duck for any fast lockers.

If you are going to be fighting on the gate you will want a lot more bookmarks. These bookmarks have three main uses: escape, safety and movement. These let fighters move to other fleet members quickly, get a look at targets before deciding to engage and quickly leave and reenter the battle. If the bulk of the fleet is at least 150 off the gate with only some tackle on the gate, they can warp in right on top of what ever gets caught, or if the fight moves too far away from them, they can warp to a book mark then warp to a fleet member.

Bubbles come in 3 types, anchorable bubbles, light interdictors and heavy interdictors. They All do the same two things, the differences is how they are deployed. All bubbles are only usable in null sec. Their two effects are prevention of initiating warp and changing where players exit warp. You can still use MWDs while in a bubble, in fact they are the main reason 95% of ships in null sec should have MWDs.

The first effect is fairly self explanatory, Your ship will not enter warp when you are in a bubble. However, if you are already in warp when you pass though the bubble it won't pull you out. You can go 5km out of a bubble, turn around and warp right though it.

The second effect is their pulling effect. If there is a bubble on the line your warp takes you onto the grid, you won't land on your target but just inside the edge of the bubble. Bubbles set up to take advantage of this fact are called pull bubbles. (There are two other moderately common names for these bubbles: Drag bubbles and sucker bubbles)

The image below shows and example set up. More complex multi bubble gate set ups are common, but they all follow this principle. 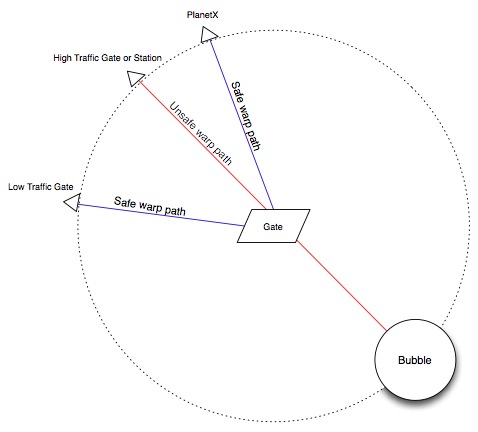 Now the three types of bubbles: Anchorable bubbles come in 6 types that vary only in size and anchoring time. They vary from 5 km to 40 km in radius. Anchoring time from 60 seconds to 480 seconds. Tech II bubbles have the larger radius than their T1 counter parts, and also take half the time to anchor. These bubbles can be targeted and destroyed.

Light interdictors are the T2 destroyers. They can drop warp disruption probes. The probes last 2 minutes and their bubbles are 20 km. The probes cannot be targeted, however they can be destroyed with smart bombs. Generally it is better and faster to burn out of the bubble than to try and smart bomb it.

The last type of bubble is the heavy interdictor bubble. It is produced by a special high slot module that can only be fit on a heavy interdictor. It's size is dependent on the pilots skill, base size of 16 km, and maximum size of 20 km. It is an activated module that burns though capacitor. It will also disappear when the heavy interdictor is destroyed. The warp disruption generator can also be scripted to target single ships instead of producing a bubble.

A final note: Bubbles and capital ships. Capital ships cannot use their jump drives while inside a bubble. Super capitals (Titans and super carriers) are immune to all e-war, including scrambles and disruptors. Bubbles or scripted warp disruption generators are the only way to tackle them.

Have students practice jumping into a system then burning back to the gate.

Have students set up bookmarks around a gate, then drop some cans with prizes and see who can get to them first.

Put students in noob ships with MWDs, divide them into groups and have them try and move though a pipe while instructor(s) hunt them. Likely give them scouts as well to practice intel giving. Then switch, and let them hunt instructors?