From EVE University Wiki
Jump to: navigation, search
It has been suggested that this article or section be merged with Forward Operating Base. (Discuss)
This article is a stub. You can help the UniWiki by expanding it.

Pirate forward operating bases (FOB) are NPC structures with dynamic pirate rats associated with them. The FOBs can spawn in all high and low security systems.

There are forward operating bases only for Guristas and Blood Raiders with Guristas base spawning in Caldari and Gallente space while Blood Raider base spawns in Amarr space.

An active FOB in system has following effects: 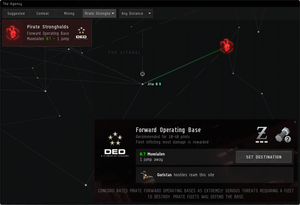 Pirate FOB near Jita seen in the agency interface

The forward operating base, base defender rats and pirate mining operation rats are also visible on directional scan and scannable with combat probes.

The forward operating base is the main point of content. The FOB is an NPC owned structure that follows many of the same mechanics as the Upwell structures. The structure is defended by a pirate fleet that scales based on ships that are attacking the base.

Capsuleers rarely do anything for free. The Directive Enforcement Department of CONCORD (DED) will pay approximately 29 million isk to each pilot that is involved in killing the FOB structure. This includes all fleet members that are on grid with the FOB when it dies even if they deal no damage. This payout maxes out when the fleet has 40 pilots.