State of the University - June to August 2009

For those not familiar with it, the 'State of the Uni' report is a semi-regular post detailing what's been happening in Eve University in the last few months, allowing members past and present to get a better handle on all the work done behind the scenes by the operations side of the Uni. There have been quite a few events since the start of June, so I'll skip the preamble and get right to business.

This is a fairly major change, as Korsiki had been E-UNI's home for quite some time. There was a fair bit of logistics involved in the move, and we even had coverage from ISD. All in all the result seems to have been a significant improvement, with better industrial, market, and PvP opportunities involved for all members.

At the start of August, we opened the Great Wildlands region to all E-UNI members, where previously all NullSec had effectively been out of bounds. Due to our new proximity, the fact we used to have the old 'LoSec Apprenticeship' in the area, and the fact it is NPC held space, it means we can allow members access with significantly reduced potential for diplomatic incidents, while avoiding having to fly half way across the galaxy.

BYOM - Bring Your Own Minerals Program

The 'Bring Your Own Minerals' program has not had a great deal of use over the last few months, and indeed over the last year. This is effectively a selection of pre-researched blueprints that Students and Graduates can use to produce ships from Frigates to Battlecruisers. We hope to be able to expand this to all T1 ships below Battleships, including Industrials, so expect more information about this when we can.

For a while, the majority of the value in the hangars was in High Slot modules for Battleships, which gets very little use, and was somewhat of a liability, leading to some thefts. This has been reduced to be more in line with the rest of the hangars, and we haven't had any significant issues since. The hangars have seen significant use both before and after the move by the students, and wartime losses have been covered with no issues.

After a few small corp thefts, we made some changes to our security procedures to ensure that any thieves are easier identified. All members requesting student or graduate status now need to provide their API key to a custom built application, which snapshots a selection of statistics about the characters on the account, which the directors can then query. This means that alts and troublemakers can be identified much easier, and significantly limits any potential damage.

Previously, when a member reached Graduate status, they had the option of applying for a Graduate medal. This involved donating the ISK for the medal to the Uni, although after a poll of the membership it was decided that if we provide the medals as part of the graduation, it would reduce some administrative overheads, and as a group the graduate would not have a problem covering the cost.

In the last 3 months, we have had a total of nine wardecs, most notably from IDLE Empire, and The Final Stand, and ended up positive in the ISK efficiency with all of them. Both IDLE and TFS were excellent teaching opportunities, which allowed us to demonstrate both POS warfare and capital ship takedowns, as well as practice fleet tactics, providing memorable battles for all the members involved.

We migrated to the new TeamSpeak server in early June, and barring a few small hiccups, all has been well. New procedures are in place to remove old members who are no longer active, as well as identifying who's account belong to who, allowing greater freedom to members while making it much easier to identify spies.

In mid July, we launched the Eve University Wiki, 'UniWiki'. A great deal of information has been migrated already, but there is still a lot of information to be moved, and some teething issues with users logging in. We hope to have these resolved soon, and the vast majority of information moved over in time for the Dominion expansion and COSMOS 'social networking' launch with the improved in-game browser this Winter.

While we do have the audio library of record classes, the Education department is always in need of staff and members to hold lessons. Scheduled lessons have been a little short, but a number of classes have had their notes posted on the Wiki with more being added steadily, so if you are interested in teaching, send a forum PM to Dierdra Vaal or Peter Strasser.

For the uninitiated, Division 6 is the 'deep space' wormhole operations arm of E-UNI. They are run semi-autonomously, but still follow all the normal E-UNI policies and report to the Education division. Most of their actions are classified, but their operations are proceeding well, and growing at a sustainable rate, with the first Tech 3 ship moving off the production line, which was raffled off to the E-UNI members.

Financially, the Uni is looking good, with operational expenditure slightly below income, despite the significant costs, with sizeable donations coming in steadily from all over New Eden. 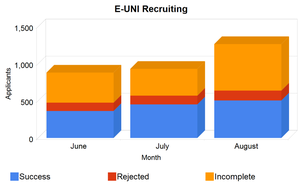 During the three month period, we had over 3,000 pilots apply to E-UNI, which averages out at around 33 applications per day, and our busiest month was August, with an average of 40 apps per day. Of these, around 50% of them never contact a recruiter, and of those that do, approximately 20% of those are rejected as being unsuitable. The fact our RO's have processed around 1,500 pilots is nothing short of astounding, and attests to the tireless work they do on behalf of the Uni.

I've produced a 'stacked bar graph' visualisation of these stats from our internal tracking documentation which can be seen to the right, and with a bit of luck expect to be able to provide similar information for the next State of the Uni report. 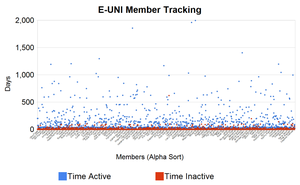 Moving on to the other end of the process, during the period I removed 407 inactive members, but despite this we reached over 1,400 members, over 300 in corp chat and took 15th place in the alliance rankings during August, all of which are significant firsts for E-UNI.

Again, to the left is an analysis of the current member statistics for the Uni, showing time served in the corporation, and how long members have been inactive. As you should be able to see, we have very few inactive members, as well as a dedicated hardcore of teachers and other staff with over a year in the corporation.

June through August has been a great time for the Uni, with some significant changes and a good few firsts - Eve University just keeps going from strength to strength!


Note: A discussion topic for this post is available On The Ivy league Forums.