Abyssal Deadspace is an area of isolated space. It was added to the game in the Into The Abyss expansion that went live on May 29th 2018. 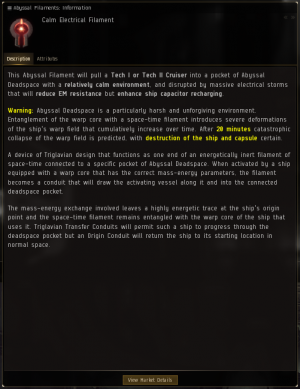 A new type of space can be accessed using filaments obtained from data sites and from abyssal deadspace. Five tiers of increasing difficulty exists. The Abyss is limited to a single Tech I, Tech II, Navy Faction or Pirate Faction cruiser and is accessed by activating a filament in space. Activation can be anywhere in space, but it needs to be out of range of Gates, Stations and mobile depots by 100 km. When activated, a combat-probable beacon is created at your entry location that allows others to await your return from the pocket.

Within the Abyss, in each pocket is a structure called the "Triglavian Bioadaptive Cache" which has a scant 300 hit points and contains all the loot for that pocket.

Further site restrictions: you can not be warped to within the Abyss, nor can you warp out of it. You can not cloak nor deploy a mobile depot. There is no local. Core Probes and Combat probes launched will be removed from space shortly after launching and cannot be recovered. The Directional Scanner will not work. The map does not work. At the present moment, if a player is in Abyssal Deadspace when server downtime occurs, the player will still return to the Abyssal system, however the complex will have de-spawned and the player will be stuck in empty void space: the only way out is to self destruct.

Each Abyssal Deadspace instance will have a weather effect that spans over all three pockets of the instance. Five types of environmental weather effects exist affecting both player and NPCs. The type is identified on the info of the filament and can be countered if desired by fitting choices. The name of the filament itself gives clues as to what tier and difficulty it is. A Raging Exotic Filament means that it is a Class 4 site with Exotic Particle Storm effect. A Fierce Dark Filament is a Class 3 site with Dark Matter Field effect.

The weather bonuses and penalties apply to all entities within the abyssal deadspace. This includes your ship, rats, missiles and drones.

The Abyssal Deadspace contains variety of different kind of rats. Each rat will behave differently and taking the right approach in different situations is important.

Rogue Drones are perhaps the most common enemy type encountered in Abyssal Deadspace. The sub battleship drones deal single damage type EWAR based on their name. The battlecruiser sized rogue drones are notable for having very high damage combined with very short range and incredible tracking, they will easily be able to track and hit medium drones that are attacking them. If you can keep them at over 10 km from your ship they will deal very little damage.

It is best to start out by killing EWAR ships that pose threat to your ship, meaning webbers, tracking and missile disruptors if your ship uses those weapons and target painters if the pocket has battleship. You should also keep eyes on the logistic drones. If you can't kill other frigates before repairs land you will need to kill the logistic drones first. After the dangerous EWAR and logistic drones are dead you can focus on the damage dealers in your preferred order.

Some of the Rogue Drone battleships have defensive webs making it difficult to get into sub 10 km orbit.

Drifter ships most often start with damaged shields and armor. The battleship deals heavy damage but a cruiser can get under its guns to avoid taking hits. The drifter cruisers all use some form of EWAR in addition to dealing damage.

Every Sleeper drone is equipped with remote repairers so it is best to kill smaller ships first as they die before repairs land. In addition to dps they will also use webs and energy neutralizer.

Vila Swarm Drones - Can be combined with any of the above. The Vila drones deactivate when the ship they are linked to is destroyed so you shouldn't waste time killing them.

But sometimes the natural resist hole of the rat is equal or even greater than the resist hole caused by the weather.

This means that you have to consider where you use the filament, especially in low security and null security space. But even in high-security space you are not safe. Anyone who enters a Tier 4 or 5 Abyssal Deadspace will be flagged as suspects once they leave the site, and anyone are free to shoot them. Tier 1 to 3 does not trigger the suspect timer.

You will be invulnerable for a short time, so be patient if you leave the rift and find yourself being camped. A survival tactic could be to quickly activate a new filament - especially a tier 1-3 filament that you run in order to run down a suspect timer in hisec - but beware, many players have now got wise to this and will anchor a mobile depot which will prevent you activating another filament.[1]

The Abyssal Deadspace is dangerous but the rewards can make it worth for those who can complete the pockets. The abyssal space is the only source for many valuable items and materials, which are found in the Triglavian Cache:

Note: The rewards are only found in the Triglavian Cache, not on NPCs.