Difference between revisions of "Amarr Empire" 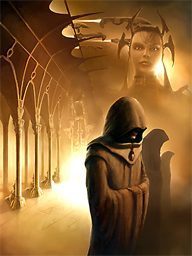 The Amarr Empire, a theocratic monarchy, is the largest nation in New Eden. It is known for its omnipresent religion and use of slave labor.

The largest of the empires in New Eden, Amarr spans 40% of the inhabited solar systems. Their home planet in the Amarr solar system was named Athra in ancient times, but rechristened to Amarr Prime once the Amarr conquered it.

Amarr is a theocracy and a ritualistic, authoritarian imperial state where the ruling figure, the Amarr Emperor, holds near-absolute power. Below him are the five Heirs, the heads of the five royal families from which a new Emperor is traditionally chosen, along with a sixth one only recently brought back to the fold. The Emperor's authority is unquestioned and absolute, but the archaic and bureaucratic system of government makes it difficult for him to exert his rule unless directly in person. Otherwise, the Heirs rule in his name, dividing the huge empire between them.

The Emperor and the Heirs can expect to live for at least 500 years. Extensive cyber-implants keep their frail bodies alive even when their organs begin to fail. These cyber-enhancements date back many millennia, and have become a symbol of royal divinity in the eyes of the Amarr.

Always a deeply religious people, religion remains of great importance to every Amarr, a fervor which at various times has been responsible both for great good and great evil. Shortly after recovering from the closure of the EVE Gate, they began to expand their realm at the expense of neighboring states. The nations they conquered were enslaved, a practice justified by their religion. In the thousands of years since, the Amarr have enslaved every nation and race they have encountered, so that today slavery is an essential part of Amarr society. This has, of course, tainted their relations with other empires, especially the individualistic Gallente.

The Amarr were the first of the races in New Eden to re-discover interstellar travel technology, including jump gate tech. After accomplishing this, more than 2,000 years ago, they immediately began expanding to nearby solar systems, slowly building up their empire in the process. On the way, they encountered two human races, both of whom suffered the fate of being enslaved by the far more powerful Amarr.

In recent years, however, the Amarr have begun to run into serious opposition. First, they met the Gallente Federation, and found that while it was much smaller than the Amarr Empire, its economic and military might was a match for their own. Soon after, the Jove arrived on the scene and the Amarr made a futile attempt to subjugate them, resulting in a humiliating defeat for the Empire. To make matters worse, the Minmatar, enslaved for centuries by the Amarr, used the opportunity to rebel against their slave-masters.

Since these fateful events almost two centuries ago, the Amarr have learned restraint. They have slowed down their expansion and are less forceful in their dealings with other races, but still view themselves as the most powerful race in New Eden, if only because of their sheer numbers and, of course, the support of their Holy God.

In regards to Amarr bloodlines, it should be noted that the Amarr revere age and experience. They often make themselves look older than they actually are, giving them mature, weatherworn features.

True Amarr – those directly descended from the Amarrian ethnic group before it conquered its home planet and intermingled with other people – are proud to the point of haughtiness, with a great sense of tradition and ancestry. They are considered arrogant and tyrannical by most others. Their presumptions of grandeur suffered a direct hit when they lost a war against the Jove, thereby losing control of the Minmatar home worlds. This blow, a defining point in their history, is something they still collectively reel from.

The Ni-Kunni were a primitive race conquered some 1000 years ago the by Amarr Empire. Unlike most other races conquered by the Amarr, Ni-Kunni adapted to Amarr society far better; today, only a small minority is still enslaved. Their home planet of Mishi IV in the Aridia region is an inhospitable place, dry and desolate. The Ni-Kunni feel they have this harsh environment to thank for toughening them up and allowing them to overcome the worst of adversities. Most Ni-Kunni are tradesmen and artisans - occupations frequently frowned upon by the Amarr, but still a vital part of society.

The people of Khanid have endured the political turmoil of their leaders with great dignity and calm. The Khanids were fellow settlers alongside the Amarr on Athra, better known today as Amarr Prime. During the height of the Amarr Reclaiming, the Khanid were swept up and merged into the growing Amarr nation. They proved themselves valuable allies to the Amarr from day one and have ever since held exalted status within the Empire, with only a handful of them ever actually having to endure slavery. The name Khanid was given to the ruling family by the Amarr. It means ‘little lord' or ‘lordling;' an affectionate term bestowed only on a cherished friend. The name stuck to the nation as a whole at some point and even after the Khanid domain was granted to one of the great Amarr Holder families, the family adopted it as their own, winning the hearts of the Khanid people in the process.

While not an Amarr bloodline as such, the Ealur are nonetheless an important part of the Empire: They are one of the most common slave races around.

One of the minor races in the Amarr Empire, they are from the same planet, Amarr Prime, as the Khanid and True Amarr.

The Udorians arrived on Amarr Island in 20022 AD, spurring the static Amarr society into rapid changes. Later, they were the first established civilization on the planet to be assimilated, right at the beginning of the reclaiming; they have long since been fully integrated into the Empire, to the point where there is now a Udorian Royal House. The social and physical difference between the True Amarr and Udorians disappeared ages ago, although societal traditionalists prefer to remember them.

Huge swaths of the Empire were either shell shocked, grieving for lost loved ones, or largely exuberant as a result of recent world-changing events, all because of the invasion of the Elder Fleet and Jamyl Sarum's triumphant return from death to save the day.

The common assumption had always been that the Minmatar Republic was simply no match for the Amarr Navy; the Minmatar people were always seen as poor wretches in need of assistance (as well as a useful source of manpower). Following the destruction inflicted by the Elder Fleet, though, people are struggling to come to grips with a world where the Minmatar are, if not military equals, at least worthy of consideration in this regard, and many are grudgingly re-evaluating their feelings about the old slaves.

Most, though, don't even want to think about what would have happened had the Elders been able to complete their mission unopposed; only Jamyl Sarum's timely appearance and subsequent annihilation of one third of the invading fleet ensured that that didn't happen. While the circumstances of Sarum's somewhat miraculous return have raised more than a few eyebrows, the majority of the population are happy to take her successes as a sign that God is still on their side, and her strident advocacy of a return to the Reclaiming of old gives a clear message about the relationship between Empire and Republic that most find comfortably familiar. As such, they're generally happy to ignore any niggling doubts and thus to allow her to lead the Empire, provided that the good fortune that's accompanied her return does not suddenly evaporate. They're also very keen on anything which departs from Karsoth's less-than-stellar reign.

The military, as a whole, was even more rattled than the general population, because they knew the Minmatar should not have had the strength to do what they did. They're still trying to figure out where the hell all those Minmatar ships came from, and a drastic shakeup in the intelligence gathering arm of its operations seems imminent. With the near-annihilation of the 7th Fleet in the Bleaks and the general failure to hold any kind of defensive line, there's been significant internal turmoil.

Jamyl Sarum not only saved a lot of Amarr lives, but she's also following up on the Sarum family's traditional pro-military stance and, as a corollary, effectively absolving the Navy of blame. Generally, the military is more pragmatic about her than the citizenry. They can see that her return is not entirely in keeping with tradition, but they'd rather have her on the throne than any of the alternatives, and they certainly agree with her professed goals. For the foreseeable future, they are likely to be fervently loyal to her.

The Holders and the members of the five Houses have much more diverse opinions on Sarum's return. The great game of Imperial politics is already shifting up a gear, the vicious muddle of Karsoth's reign giving way to a far more expansive and increasingly ideological struggle for dominance. The Chamberlain’s allies in particular have either fallen out of view or are shamelessly attempting to realign themselves into a pro-Sarum stance. There are winners and losers everywhere, and Sarum's apparent magnanimity makes many feel they've been let off the leash at last.

The next few years look to be a very active and interesting time for the Empire.