Difference between revisions of "Clones"

Every capsuleer receives a free medical clone as soon as they are "born" (i.e. when the character is first created). If your character is killed (i.e. when their pod is destroyed; this is also known as "being podded"), his/her conciousness is immediately transferred into this medical clone, causing you to "wake up" again at the station where your medical clone is installed. Any implants plugged into your brain at the moment you were killed are destroyed alongside your body. 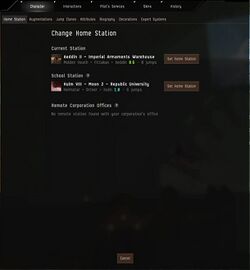 Selecting a new location for a medical clone.

In addition to installing a medical clone in the station in which you currently are, you can also install a clone remotely at any station where your corporation has an office. This is the basis behind the "pod express" travel method: set your medical clone at the station where you want to go, undock and self-destruct your pod. You will "wake up" at your destination station, but you will lose any implants you had installed, and you will need to upgrade your medical clone again (see below).

File:Medical window.jpg
The medical services window, showing how many skill points your current clone can hold.

Once your character has accumulated more than 900,000 skill points (which will happen after roughly three weeks of skill training), should you die, you will lose 5% of the the excess skill points (SP) you have accumulated.

This can be avoided by upgrading your medical clone to make it hold more skill points. You can do this through the medical facility window in any station (not just the station where your medical clone is currently located), but you have to pay a fee (higher-capacity clones cost more money). The basic clone is called an "Alpha-grade" clone and can hold 900,000 SP; higher-grade clones can hold more skill points, all the way up to the Omega-grade clone, which can hold 450 million SP (more than 25 years' worth of skill training!). You can check the capacity of your current medical clone (and compare it to your skill points) in the medical facility or character screen.

After you die (i.e. were podded), make sure to upgrade your medical clone to avoid losing skill points this next time you die!

Jump Clones allow a pilot to store a non-emergency clone in a different part of the galaxy and instantly jump his mind from his current body into a clone stored on the far side of the universe. Unlike medical clones, these can be activated at will (although there is a cooldown between uses) and have no limits to their skill point capacity. Also, unlike medical clones, they are not provided for free, and require specialised training and high standings with NPC corporations to use.

Jump clones very useful to safeguard valuable implants (to prevent them being destroyed when your pod is destroyed), or to quickly travel around New Eden.