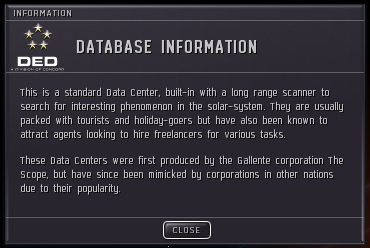 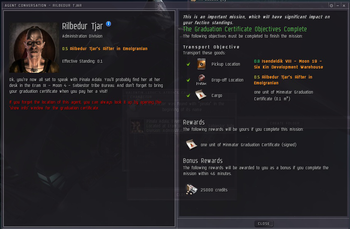 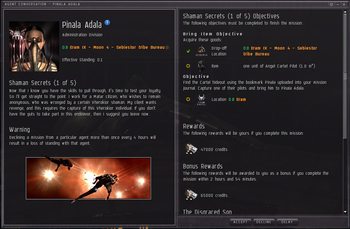 The Data Center missions are missions where you hand in pirate tags (you can loot these in missions and buy them on the market). Basically, it allows you to convert isk into standing. Data Center missions come in 2 flavours: Keeping Crime In Check (pirate tag hand-ins) and Graduation Certificate/Data Transportation (simple courier of 0.1m3).

The exception to this is the Amarr Data Centers, which has 2 systems for pirate tag hand-ins with 12 agents each for a total of 24. Both the Amarr Empire and the Ammatar Mandate are represented.

If you fail a data center mission, you will lose corporation and faction standing. Remember, you can talk to each agent only once!

The Gallente Federation collects tags from the Serpentis pirate faction.

Located at the Imperial Data Center beacon in space. The Amarr Empire and the Ammatar Mandate share data centers, therefore there are more agents. These agents give standing rewards when you bring them certain tags, e.g. Sansha Copper, Brass, Silver, etc tags. Khanid and Ammatar agents will need at least positive standing to their specific sub-faction.

The system with most agents is Emolgranlan, which is also closest to Nakugard. Once in the system, warp to the Data Center beacon. Talk to agent Rilbedur Tjar, who is floating inside a small structure in space. He will offer you a courier mission which involves transporting a Minmatar Graduation Certificate to him. After completing it, you'll receive a 0.36% faction standings increase, and you will be referred to an agent named Pinala Adala in Eram IX - Moon 4 - Sebiestor tribe Bureau. After this agent, the only missions that remain are the Keeping Crime In Check missions where you turn in pirate tags (Angel Copper Tag for example) in return for standings.

The agent in Eram, Pinala Adala, offers you the five part mission chain Shaman Secrets. These are three combat and two courier missions. It can be done in an underskilled Atron (Gallente Frigate). Note that for the fourth mission, you are not given an exact location to go to. Instead, you're supposed to decypher that it should be Eram IV - moon 2, based on hints given this mission and the previous one. You'll also need to hack the neon sign to get the gate key, use a Data Analyzer, and you'll get a side mission which gives 0.1 point of faction standing! Read the Shaman Secrets guide (see below) for more details.

After going through all these steps (the Data Center missions excluded, but COSMOS and the certificate mission included) you should have gained around 0.17 faction standing. You can further increase this by the tag missions, regular missions, or factional warfare. When turning in tags - pay close attention to the price. For example, while copper tags (for the most easily accessible agent) cost 1.5mil each, the bronze tags (for the slightly higher quality agent) only cost around 50K. Selecting the right agent (which MAY require standings with that agent's corp) can save you a lot of ISK.