Difference between revisions of "EUNIC: Selecting a focus"

In order to know where to park your incursion ships, we utilize the Incursions.E-UNI mailing list to send our focus mail whenever we move to a different constellation. If the current focus goes down, we select a new one and send out a new mail (in some extreme cases we need to wait and send a "no current focus"-mail).

This is a collective effort and anyone can and should send out a new focus mail when we need to move.

Below is a standard form that anyone can use, just paste the code (not the formatted text) into your focus mail and replace the placeholders with the proper information. If you are unsure whether we should move or not, discuss it with the people online before sending a mail because sending a mail is the same thing as committing the community to a new focus.

Copy the following code by triple-clicking on the line:

Pasting the above into a new mail would result in this:

Don't forget to add the following subject headline for consistency: 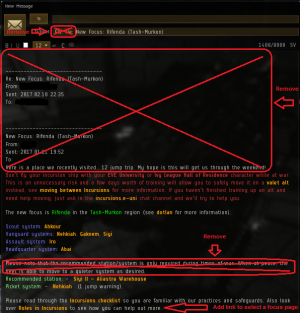 It's not recommended to forward an old mail, but if you do, make sure you trim away the unnecessary parts and tidy up before hitting send.

Helpful tips on how to handle system and station links:

Once you've sent the new focus mail to the mailing list, feel free to ping Discord in the #incursions-ping channel. Be sure to make it a single line, so as not to cause more than one ping, and keep it short and simple. An example would be something like this:

If you want, feel free to add the number of jumps from our last focus or the recommend docking station, but it's not necessary as the majority of people use the actual mail to set their destination and Discord is mostly just to make people aware that they need to move again.

Guide on selecting a focus

Sometimes we have several Incursions active at the same time and we have to choose which one to go to. This guide exists to help you out in making a good decision and sending a proper focus mail. Don't hesitate to ask your fellow community members for help or advice.

Getting information about the current incursions

Main article: How to find Incursions

Open up The Agency window (using the Alt + M shortcut or the Neocom) and go to the fourth tab and select Incursions. There you will see all current incursions that are active in EVE, which unfortunately cannot be sorted in any other method than distance, so pay attention to which ones are in high security space and which ones are not. The Agency window doesn't show when incursions spawn, but if you don't know which one is new you can try to rule out the old ones by checking their current status. Click each incursion and if they are mobilized or even withdrawing you can count them out.

Dotlan and Shadowlauch gives you a lot more information though, perfect for helping you select an appropriate focus. Just double-check the names of the constellations so they match the ones you see ingame as sometimes they might list focuses that recently disappeared or aren't listing the ones that just spawned.

Determine if we should move or not

The general rule is that we only move when our current focus disappear. There are however some exceptions to the rule, mentioned below.

Holding off due to no spawns or only bad spawns remaining

If a focus goes down and there's no focus available for a while, perhaps some drama occurred and all three incursions in high security space got popped at once, then you might send a short mail saying "No current focus" and explain why, so people don't accidentally move to the old focus thinking it's still up.

Sometimes a focus pops and the remaining focus/foci are bad ones or already on day two of Mobilized or even Withdrawing. In such a case it's often best to wait for the next two spawns before choosing the next focus. It's hard to give a fast and hard rule of this, but the key is that if the focus isn't likely to last long, or if it's an unsafe constellation to run in, we simply skip it.

If that's the case, then in most cases you should wait until both new spawns are in before settling on a system. Unless of course, the first system that spawns is an ideal one, like a perfect 1-picket constellation. Whenever you decide it's a good idea to hold off, post a "No current focus" mail explaining why the existing constellation is bad or why you decided it was a good idea to wait. That way the next person can make an informed decision when they login or a new incursion spawns.

For more information on how respawns work and the different phases for incursions, see the longevity section on the How to find Incursions page.

We want to spend as much time running as possible, while keeping the moving down to a minimum. There's enough moving around in incursions by default, so we don't want to move prematurely unless there's a desperate need to do so.

So what could be acceptable reasons to move before a focus goes down?

We like our Solitude brothers and sisters and should try to take the opportunity to visit them as often as we can. Depending on the state of the community, try to go to any and all incursions in the Solitude region, like Goins and Orvanne. For this, consider the following:

Now, none of these should be an automatic move, it just means that those could be examples of situations that warrant considering moving. In order to actually decide to move, these should be strong guidelines:

The most important aspect for our community is safety, which ultimately down to having a system to run in that is picketable and has a station to dock up in.

Sometimes you might want to consider moving pickets further out to block off a whole pocket or pipe. Keep in mind that this will open up for the possibility of having blind spots where the enemy could log off or enter through a wormhole, to sneak up on the fleet.

Adding new constellations to the wiki

In the off chance there's a new constellation spawning that isn't listed on the Constellation layouts for Incursions page, see this section on how to scout and update the wiki.

Constellations near other campuses

If possible, favour going to systems close to other campuses. This will help new people swing by to try our incursions, or raise awareness of our community. Going to Solitude is also something to consider, see the section above.

Due to the preference of our war targets to frequent major trade hubs like Jita and Amarr, generally it's best to try to avoid incursions that spawn too close to those trade hubs.

That said, as long as it has a good picket system and a station, they are technically as safe as any other constellation. The problem that may arise from being this close to trade hubs is that it increases the likelihood of war targets bothering to swing by for a fight. So if the current war targets can field 5 - 10 people fleets on short notice, running too close to their usual hunting grounds might lead to stranded fleets and even if we don't lose ships due to our pickets, it still means we're stuck in station not running.

It's not always easy to see connections on dotlan due to only seeing your region and the fact that you could be just one or two jumps from a completely different region.

Selecting the recommended station where we dock up

Basically we just need a station to dock up in, in the preferred vanguard system we'll be running in. If this station has repair facilities that's a plus, but even if there's no staton with repairs in it, that's still fine. If several vanguard systems are as good (same number of pickets, all have stations etc) you could refine the selection a bit more. Here are some examples: