Difference between revisions of "Ghost Sites" 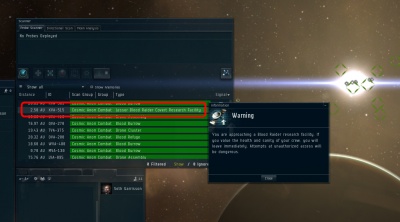 A Ghost Site in space

Ghost Sites are pirate facilities which can be hacked (like Data and Relic sites), but which have unique mechanics which set them apart. They were introduced in the Rubicon expansion.

Ghost Sites can be found using the system scanner, without needing to use probes. They shows up as cosmic anomalies (type: combat sites), and occur in all categories of space (hi-sec, low-sec, null-sec and wormhole). They show up in the anomaly list as "<size> <faction> Covert Research Facility". The <size> is solely dependent on the security rating of the system:

As expected, more difficult ones are more difficult to hack, have more rats appears - but have better loot. All have the same number of hackable containers (often called "cans") though.

When a Ghost Site is entered, a pop-up message shows up that warns the capsuleer that the site is dangerous. Note that there is an occasional bug with the scanner window which may cause anomalies (including Ghost Sites) to not show up. Uncheck and recheck the "show anomalies" checkbox to make sure you don't miss any.

When you enter the site a timer is started (unless you warp in cloaked). The time is random and not shown, but it seems that the more ships are in the site at once, the longer the timer (in practice, if running a site solo, you will generally have enough time to hack and loot 2 cans before the timer expires). Since time is of the essence, it is not generally recommended to scan the containers with a cargo scanner due to the limited time that is available before the rats warp in and make the cans explode, however if you're fast and have not fitted warp core stabilizers to your ship, you can. The stashes are opened by the hacking mini game known from data and relic sites; once the hack is complete, you can loot the cans directly. The cans are normally in a square, equal distance from each other, with one having better loot than the rest. (There are reports of the can having the best loot is named differently than the rest.) The hacking difficulty is comparable to the difficulty of hacking a data or relic site in a system with the same security status. If you fail your hacking attempt, either all the containers in the site will explode immediately or just the container you were working on will explode (see also below), unlike with normal data or relic sites. If just the single can explodes rather than all of them, you can continue hacking but the hidden timer is still running. Unlike regular data/relic sites, when these cans explode, they do damage to your ship.

After the timer expires (irrespective of how many containers you have hacked), rats (based on the local pirate population) will show up to destroy the cans and defend the site. These rats have no bounties, nor any known drops, but they do a considerable amount of damage (based on the system's security status) that can reach 2000+ raw damage, and they may use warp scramblers (confirmed in high sec, null sec & wormhole).

All the containers in the Ghost Site will explode if:

If you fail in a hacking attempt, and all of the containers explode, no rats will show up, but you will take damage from the explosion.

If the timer runs out the rats will appear and shoot the containers, which causes them to explode. In this case the explosion may be delayed for some reason, up to 30 seconds, which can allow you to warp out before it blows, assuming you are not warp scrambled. If you can tank the explosive damage, you can use those extra seconds to continue hacking/looting a can. After the explosion the rats might hang around for another 30 seconds and shoot at you before warping out. But they will warp out when it's their time to do so, even if you're still at the site, and alive.

This explosion damage seems to be around 4000–6000 raw explosive damage appears to be based on your ship's current distance to the containers. It also appears that the explosion radius is about 10km.

A ship for running Ghost Sites should fulfil several roles:

In order to hack the containers as quickly as possible, the following mid-slot modules are needed:

Armor-tanked ships are recommended over shield-tanked ships, as when the three mid-slot items listed above are installed, there is generally little room left to fit a good shield tank in the midslots. The Stratios or a Strategic Cruiser are excellent for running Ghost Sites, but these ships are very expensive and make for juicy targets during wartime. The Gnosis is a good choice, as it is not that expensive, and has lots of slot for required modules, and to mount a good tank. T1 exploration frigates or covert ops frigates are not recommended for running Ghost Sites, as while these ships are fast and make for excellent hackers, they tend to be too fragile to survive the explosion and/or the rats in Ghost Sites.

This will work for all areas of hi sec space regardless of pirate faction!

The recommended fitting is as follows:

Less might do, but with this you will survive! While not critical a Damage Control is always a good idea. It should be noted that shield tanking is also an equally viable option.

It might seem counter-intuitive to fit both a plate and a repairer, but remember that without decent buffer the explosion might hurt you and the repairer will keep you alive when the rats start shooting you. You might be fine with just the plate or the repairer in hi sec but when you move on to other parts of space both will be needed (unless you have logistics). Having the repairer is also a cheap way to fix armor damage.

It is worth remembering that the explosion of the cans is ALWAYS explosive damage, but the rats will deal damage according to their faction, so tank accordingly.

An alternative tactic to blitz a ghost site is this:

Any rookie ship. Travel in a capsule to any station where you do not have a ship to get it. Data/Relic analyser NPC dropped Micro Warp Drive.

How to do it

Keep one thing in mind. Like an angry crocodile, the npc's will tear you apart on sight. Be fast.

When warping into the site, spot the oddly named can and approach it as fast as possible.

Once you have hacked it, loot and get out as fast as possible. If you fail the first hack consider abandoning the site as time is ticking and the NPC's are angry.

You will not succeed every time but your loss will be quite small while the gain is high.