Difference between revisions of "Invention"

Invention is the means by which you produce blueprint copies for Tech 2 items and ships in EVE, which can then be sold on the market, or (more popularly) be used to manufacture those items for sale or personal use in the game.

A player using the invention process takes a blueprint copy (BPC) for a Tech 1 item, adds certain specialized equipment, and attempts to create a BPC for a corresponding Tech 2 item. Although it sounds simple, invention can be very expensive and difficult to do successfully.

The (hopefully) created BPC will have a single run on a ship BPC, and 10 runs on everything else. It will have ME -2% and TE -4%. These values are regardless of those on the input T1 BPC. The Runs, ME and TE levels on the created BPC can be adjusted using decryptors (see optional items below).

For a quick history of Tech II manufacturing, see the section at the bottom of this page.

You need to train several different types of skills in order to perform the invention process:

Each T2 item is associated with one of these encryption methods.

You should train the encryption method skills to at least level 3, and the science skills at least to level 4, to have a good chance of invention success.

Use one of these handy calculators to work out your invention chance using different combinations of skills & optional items:

There are 3 mandatory items and 2 optional items needed for invention. To find out which items are required, look in the Invention tab in a blueprint for any Tech I item, or load the blueprint into the Industry window and choose Invention. 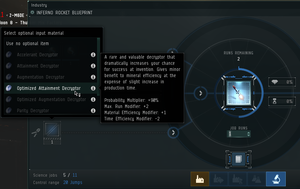 Use one of these handy calculators to work out your invention chance using different combinations of skills & optional items:

Gather your BPC, all mandatory items and any optional items you desire to use in a station with invention facilities, or in a Design Laboratory at a POS. The Design Laboratory also has a 50% reduction in the time required on invention, which is highly useful.

Select the relevant BPC in the Industry window, and choose Invention on the activity list. The resulting window will tell you your invention chance, taking into account your skills and any selected optional items.

The optional items can be selected using the boxes on the left hand side of the Industry UI. All possible items will be listed, but items not available for use (i.e. not found in the input material location) will be faded out. You can use the decryptor selection box to look at how each different decryptor affects invention chance and outcome.

Be sure to select the correct Outcome, because some T1 BPCs can invent more than one T2 item (for example, a Scourge Rocket BPC invents both the Scourge Rage Rocket and Scourge Javelin Rocket BPCs, two different types of T2 rocket ammunition).

Currently, there are no Teams that work on Invention, but these will probably be added later (CCP has committed to looking at Invention in patches/expansions after Crius, see http://community.eveonline.com/news/dev-blogs/lighting-the-invention-bulb/). 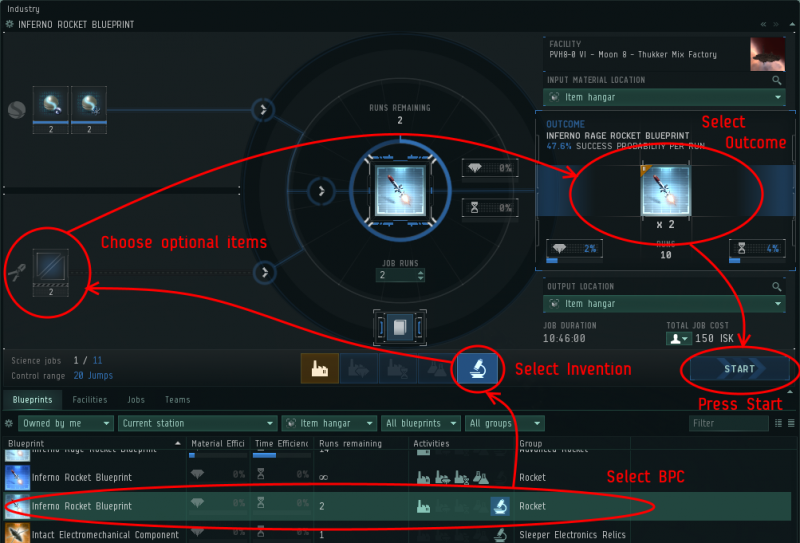 Once the job is complete and delivered, you do not receive any explicit notification if your job was successful. The only indication of success is that the 'Outcome' box in the Industry window actually contains your T2 BPC and an animated blue highlight - you will be able to find your new T2 BPO in the list of blueprints.

If your invention failed however, the 'Outcome' box in the industry window will tint red, with an animated red bar across, and display a large Job failed text in red.

You can also see a summary of the success or failure of each job in the job listing after delivery.

Either way, your datacores and optional items will be consumed, and your BPC will be returned with one fewer run on it (unless it only had 1 run remaining).

The chance for a successful invention is calculated by this formula:

It's not difficult to get a good chance of success for modules, but progressively more difficult for ships as their size increases. This is why investing in some decryptors is a good idea for Tech II ship invention jobs.

For example, using one of the invention chance calculators linked earlier:

Press the "Recalculate" button. The probability of success is 47.8%, near enough to what we see in-game.

Now enter Meta level 4 for the base item and recalculate. The probability of success is now a whopping 74.2% - this illustrates the value of using higher meta level base items in invention jobs. You can experiment with different skill levels and items to see how the probability changes. Use this to determine the levels of skills you wish to train, and whether you want to invest in meta level items or decryptors.

Note that the following factors have no impact on the probability of invention success:

Apart from the invention chance calculators linked earlier, here are some more links: