Mare Sargassum is an expedition found by completing Desolate Site combat sites. It may contain up to four parts. The first three will be in high-sec space, while the fourth can be in low-sec or high-sec. The sites do not have gates, and can be easily completed in a cruiser.

The initial defenders can vary wildly.

The initial defenders consists of around 6 frigates and one sentient drone.

Reinforcement wave triggers aren't confirmed but it may be triggered time, from approaching the thrash construct or by destroying the sentient drone. It is possible to have this wave included in initial defenders, possibly due to warping through the thrash construct.

Similar to first, killing sentient drone first triggered escalation. There is at least one reinforcement wave.

Fewer rogue drones, and killing the sentient drone once again triggered the escalation. As a bonus, you get to see a great big red cube in space. The Borg turned more evil? 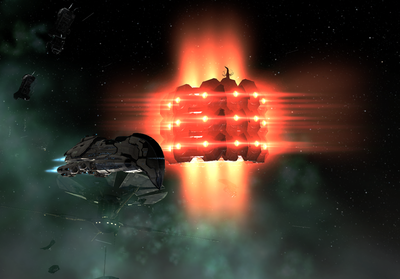 Each part has a commander rat which, when killed, will drop T2 salvage and Rogue Drone components. Lootable cans may contain drone alloys.