Every ship in EVE. with the exception of shuttles and freighters. can fit a Scan Probe Launcher module. These launch probes that increase the number of types of objects that can be detected and the range at which they can be scanned. In addition, probes provide distance and coordinate information.

All scan probes can be used for finding cosmic signatures. Combat scan probes can find structures, ships, and drones. Wrecks, cargo containers, and cloaked ships cannot be scanned with probes.

(Read Probing In Simple Steps for a more detailed guide, with tips and troubleshooting.)

To reset the formation press either of the two preconfigured probe-patterns to reset both scan-range and position. This does not however reset probe constellation position in space.

Where to find sites

Sites only seem to spawn in a sphere 4 AU around celestials (may only be planets). If you are scanning large reaches of empty space, you might find mission sites and abandoned drones, but probably not much else.

Carry exactly twice as many probes as you use at a time. When you load your launcher initially, only load the amount of probes you can have active. (For example, if you have 8 probes active, carry 16 but only load 8.) As soon as you've launched your maximum number of probes and are busy placing them, the launcher will automatically load the next stack -- exactly the amount you need for the next system (be aware, activating a cloaking device while the reload timer is ticking down will cancel the reload due to being cloaked). That way, the launcher will always be ready without you ever having to manually load it.

Results, and what they mean 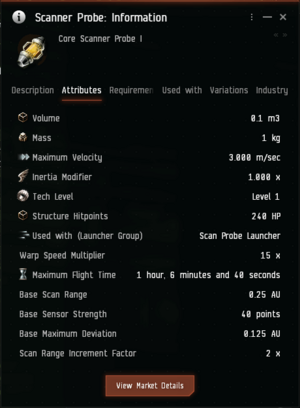 The attributes tab of a Core Scanner Probe I.

Smaller scan range gives better results but scans a smaller volume. This makes core probes better at scanning hard to scan signatures where the smallest scan range needs to be used. On the other hand combat probes can be used to cover a larger 64 AU scan area for a very rough system scan. When scanning with ranges larger than 0.25 AU but smaller than 64 AU it will not matter which probes are used.

Maximum Flight Time limits for how long probes can be kept in space. For Republic Security Services ("RSS") probes this is 16 minuts and 40 seconds, while all other probes have 1 hour, 6 minutes and 40 seconds. If probes are left in space for more than this duration they will automatically return to the cargo bay as long as there is sufficient space for them, if not they will be lost.

The deviation is the distance between the scan result shown on the map and the actual location of your target.

In order to calculate the maximum possible deviation you use the constants provided for the type of probe, the scan size your probes are set to, and your skill levels of Astrometrics and Astrometric Pinpointing.

Here is the formula:

Below is a table that shows how your Astrometrics skill affects the maximum possible deviation of scanner probes. Keep in mind that while Sisters probes and/or launchers have no effect on maximum deviation, they do have an effect on signal strength that will affect the deviation that you see in your scans.

Scan results are divided into cosmic signatures and cosmic anomalies depending on how they are located. They are also split into wormholes, combat, ore, gas, data and relic sites based on their contents.

Cosmic anomalies are PvE sites that can be found throughout EVE. They are found using the system scanner, and require no skills or equipment to locate. To locate cosmic anomalies, simply open the probe scanner window where they are visible as warpable sites.

Cosmic signatures are scannable locations in space. To locate a cosmic signature it must be scanned with scan probes. You can see in the scan window whether a system contains cosmic signatures, but identifying them and pinpointing them requires scan probes. The type is identified at 25% scan, the name is revealed at 75% scan and the site is warpable at 100% scan.

Much of the information surrounding the respawn mechanics of cosmic signatures is based on theory, with little hard data offered by CCP. Nevertheless, the sites will respawn immediately after being fully cleared by a player. It is unknown what range the new site will spawn in (if it's in the same region or not) or whether it will be of the same or similar type as the one cleared. Note that, based on this information, we know that sites will not respawn after daily downtime. They will only spawn when sites are cleared somewhere else within the game world.

Scanning can be done in any ship that has a high slot for a probe launcher. However there are ships with innate bonuses to scanning.

Each race has a T1 frigate with a 7.5% increase to probe strength per level of racial frigate skill trained. They also gain a +5 bonus to virus strength that helps with hacking.

Covops ships are the direct upgrade from T1 scanning frigates. They get an increased 10% to probe strength, 5% probe deviation bonus per level of racial frigate skill trained, +10 bonus to virus strength and can use covert ops cloaking devices.

The Sisters of EVE faction ships all have a 37.5% role bonus to scanning and the frigate and cruiser are also able to fit a Covert Ops cloak. They also get bonus to armor resists, energy turrets and drones and virus strength making them capable combat crafts and hackers. They have lower skill requirements than CovOps T2's, but they are insanely expensive compared to other T1 ships and considerably more expensive than T2 ships.

Strategic cruisers can be fitted with the Covert Reconfiguration subsystem that gives them probing bonuses and ability to use Covert Ops Cloak. If you're in a roaming gang of strategic cruisers, this might be useful.

To do scanning you need a Probe Launcher module, and some Probes. All other scanning modules and rigs are just to make scanning easier.

There are numerous Implants that range from almost disposable to exceedingly expensive.