Difference between revisions of "Probing In Simple Steps"

In order to get started with exploration it is handy to have these basic skills:

Astrometrics (rank 3) 4-5: I for Core Probe Launcher and all Scan Probes, II for Expanded Probe Launcher. IV is the prerequisite for the supporting skills, and should be the baseline.

Astrometric Pinpointing (rank 5) 2-4: Reduces maximum scan deviation by 10% per level -- This skill is useful especially in the early phase of finding a signal, my method of probing tries very hard to alleviate the issue of deviation by getting to 100% signal strength before trying to pinpoint the location. Technically you could get away with having none of this skill, but since it only takes a trivial amount of time to train to 3 or even 4, you may as well do it to make your life easier. Training high levels of this skill paired with high signal strength will allow you to reduce the scanning radius more aggressively. Lvl 2 and 5 allows use of T1 and T2 scan arrays respectively.

Astrometric Rangefinding (rank 8 ) 3-4: Increases 10% scan probe strength per level -- Increases 10% scan probe strength per level which makes it the most important of these skills, but it is also the hardest to train because it is rank 8. For example the training time for V is going to be in the neighborhood of 25-30 days. For that reason alone think that level 4 is sufficient. Lvl 2 and 5 allows use of T1 and T2 scan arrays respectively.

Astrometric Acquisition (rank 5) 0-3: 10% reduction in scan time per level -- Given that the base scan time is now 10 seconds, this skill is close to useless. As a rank 5 skill it would take in the neighborhood of 3 days to train it to IV, which is just not worth it to shave another second off of your scan time, even spending the roughly 15 hours to bring it to up to level III is iffy in my opinion, so that is were I would set the cap for that skill. Training this to lvl 5 is useful mostly to hunters, to scan down targets as fast as possible. Lvl 2 and 5 allows use of T1 and T2 scan arrays respectively.

Cloaking: To use a cloaking devices, training to lvl 4 is a must to fly ships with ability to fit covert ops cloak. Do not use covops ship without covops cloak, since it is your only defense.

Other recommended skills: (someone in your gang should have these)

Archaeology: Minimal level III to be useful, V to use the new T2 module

Hacking: Minimal level III to be useful, V to use the new T2 module

The first and most important piece of equipment you need for exploration is a probe launcher, and of course probes to launch from it. Any ship can be used for exploration, but the frigates mentioned above offer a bonus and a covert ops frigate is optimal. The normal core probe launcher and core scanning probes are the starting point for scanning signatures. Later these can be upgraded to T2/sister core probe launcher and sister core scanning probes. Sister probes are relatively cheap way to improve your effectiveness in scanning.

The probe launcher and probes are the only mandatory equipment. Other useful equipment should be chosen to fit the job you want to do.

Of course you also need equipment to run the sutes you scan.

For data and relic sites a data, relic or integrated analyzer is needed, cloak and micro warp drive combo allows you to do Cloak trick and drastically increases survival chances in null security space. You can also fit either nanofibers for speed and agility, inertia stabilizers for agility or warp core stabilizers for running away.

for gas sites a gas cloud harvester is required and for combat sites you need to fit your ship with combat equipment. 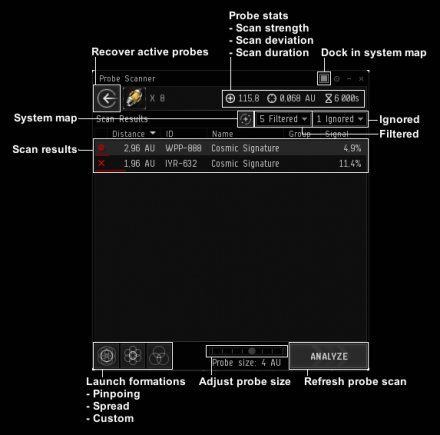 To start probing launch your probes and open both system map and probe scanner window.

With the probe scanner open the system map now shows information relevant for probing. The red spheres are signatures that need to be probed with probes, green icons are anomalies or completely probed signatures and the blue spheres are your probes.

You have several controls for your probes.

If only one probe overlapped with the signature the result is a sphere. You know that the signature is inside that sphere in region that overlaps with one probe only. Place your formation there, adjust size and scan again.

If three probes overlapped with the signature the result is two points connected by a line. The signature is near one of the points. Usualy it is on the point that is further away from your probe formation center. Move your probes, adjust size and scan again.

If four or more probes overlapped with the signature the result is one point. Center your formation on it, reduce probe size and scan again.

Repeat the above steps until the signature is scanned and you can warp to it. 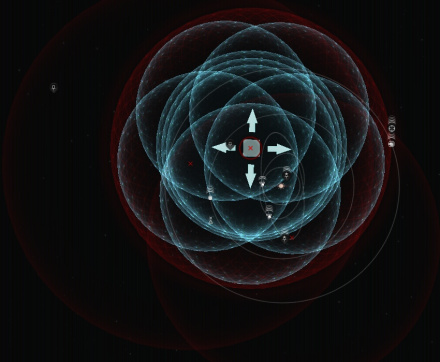 When the signature is seen as a sphere place the pinpoint formation to cover the whole sphere. 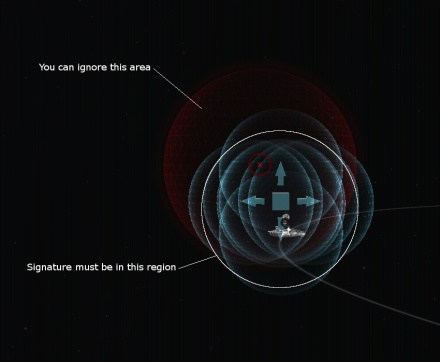 The signature is always withing 4 AU from a celestial. If there is only one celestial in the area you can move your 4 AU pinpoint formation to cover only space near it. 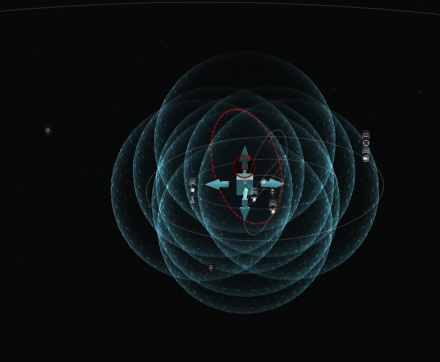 When the signature is seen as a circle there is no good simple trick. Move the probes to cover whole circle but closer to one of its sides. 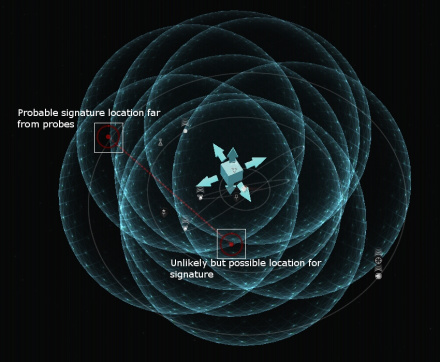 When the signature is seen as two points the point that is further away from your previous scan point is most likely the signature location. 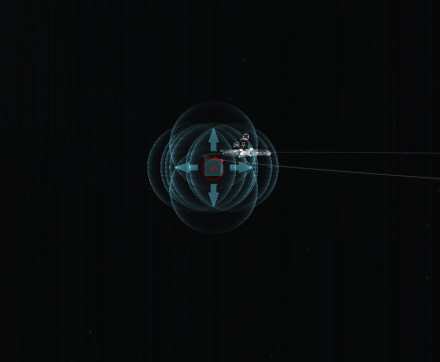 When the signature is seen as single point move probe formation on it and decrease probe size.
Retrieved from "https://wiki.eveuniversity.org/index.php?title=Probing_In_Simple_Steps&oldid=150803"
Categories: