Difference between revisions of "Ship spinning"

Ship spinning, more frequently referred to as Station Spinning, is the act of remaining docked in a station and rotating the camera around your ship repeatedly.

When CCP introduced "captain’s quarters", the “hangar view” was removed and many people were upset with the loss of spinning the camera around a ship in station.

CCP not only reintroduced the “hangar view” to allow ship spinning, but added a ship spinning counter. If you spin your ship over 10 times, the number is shown in grey at the bottom center.

When the counter reaches multiples of 100, it briefly flashes a brighter white.

When the counter reaches multiples of 1000, it briefly flashes blue.

In 2011, E-Uni introduced a Station Spinning 101 course, aimed at providing players something to do during times of war. The class has since been discontinued.

Ship spinning trick: you don't have to rotate in the same direction. you can actually just hold down the left mouse button and shake the mouse left and right. The farther left and right you shake the quicker the counter goes up! 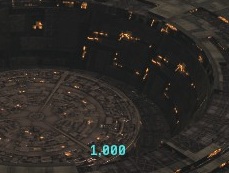