A brief overview about the basics of timers and their impact on capsuleers in empire space.

The Retribution expansion introduced a new and improved timers system called Crimewatch 2.0, which greatly improve upon the previous one by getting rid of the Global Countdown Timer and generally streamlining the system via the use of specific flags.

It's very important to be aware of and understand what the different timers mean and what the implications are in terms of legality. Timers can easily wreak havoc in the fleet causing issues with rules of engagements and remote assistance.

See Crimewatch for more details on the more intricate mechanics of legal timers.

The following timers have no direct impact on the legality of actions, but serve as a consequence for your actions. Keep in mind that the capsuleer log-off timer can indirectly cause legality issues if you are also at war.

The non-capsuleer log-off timer is created when you either shoot or get shot by an NPC.

This means you will remain in space if you disconnect or close the client, until the timer runs out. The NPC timer will not be renewed if you are shot while already having disconnected or logged off.

The capsuleer log-off timer is created when you either shoot or get shot by a fellow capsuleer.

This means you will remain in space if you disconnect or close the client, until the timer runs out. The timer will be renewed if you are shot while already having disconnected or logged off. So if someone finds you after you logged out they can keep your ship in space indefinitely.

You get a weapon timer whenever you activate an offensive module against another player (including webs, painters, damps, scrams, points, turrets, missiles, drones etc). Unlike the capsuleer log-off timer, you do not get this flag simply by being shot by another player.

While this timer is active you cannot change sessions, which means you cannot jump, dock or eject from, store or switch ships.

The following timers directly determine whether or not you are a legal target.

The criminal timer means that anyone can freely attack you without CONCORD interfering.

Consequences of being a criminal

Being a criminal means that CONCORD will engage and kill you in high security space. The response-time of CONCORD depends on the security of space, anything between a few seconds up to half a minute. During that time, while piloting a ship with a criminal flag you'll be unable to enter warp, jump through gates, dock up in stations, eject from, store or switch ships. Those restrictions are lifted once your ship is destroyed and you're in your capsule. That doesn't necessarily mean you can do these things, as all those actions (with the exception of warping away) would also be prohibited by an active weapon timer.

Being a criminal in low security space is practically the same as being a suspect, as long as you or anyone who assists you have no plans of jumping into high security space for the next fifteen minutes. 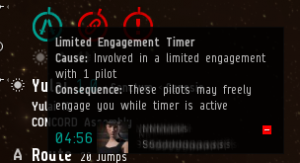 Hovering over the limited engagement icon will show all current engagements, the pilot's name and corporation as well as the time left.

Consequences of being in a limited engagement

Being involved in a limited engagement means that any for anyone to offer outside assistance, the assistee would be forced to go suspect unless you can both legally attack each other. Simply being attackable doesn't count, you actually have to have the right already through mutual wars, or your very own limited engagement mirroring the one your recipient has.

Naturally in null security space or wormhole space, where you are allowed to freely engage anyone at any time, there would be no legality issues and no timers apart from the combat timers would be created in the first place.

There are several modules that doesn't give you any bonuses, but instead is activated on a friendly ship to give them a boost. Below is a list of common assistance modules.

Apart from inheriting timers, naturally legality puts itself on top of that, regulating what actions cause you to get a suspect or criminal timer.

As remote assistance can turn the tide of battle, certain actions are legal and some are not. In general, interfering in a fight between two parties or aiding a suspect is usually a suspect offence and assisting outlaws and criminals is a criminal offence.

The SCT is a 10 second timer initiated after performing one of the following things:

Whilsr the SCT is active it prevents you from doing any of the things that cause a session change timer (i.e. anything on the list above), and will give you a sometimes amusing error message. Some of these things, if you attempt them with the SCT active, will 'queue', and will be executed as soon as it wears off.

The SCT is displayed in the top left corner of your screen. The exact time remaining will be displayed upon mouse-over. 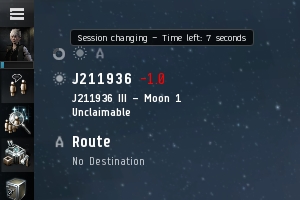 Examples of the SCT in action:

1: You are scouting lo-sec systems in a CovOps for a fleet and the FC moves you to another wing or squad without telling you. You arrive on a stargate to jump through, but the SCT prevents you from jumping.  Unfortunately there happened to be a hostile there, and because you were decloaked by the stargate, you are destroyed.

You can still press Ctrl+Space to stop your ship (or click the small - icon on the HUD) and retain your invulnerability, this action does not break it.

Important note: There are certain stations that will eject you (kick-out) outside of docking range and prevent you from using this tactic without reapproaching the station's docking radius. A prominent example would be the EVE-University HQ at Aldrat IX – Pator Tech School. Even if you immediately stop your ship on undocking, by the time your SCT has worn off you are likely to be out of immediate docking range

You are effectively completely invulnerable and invisible - however, the gate or wormhole will have flashed to signify a ship has jumped through it (and in k-space you will immediately appear in Local chat), so if anyone happens to be watching they are likely to know you are there.

This timer allows you a period of safety to scout out the system, with d-scan or otherwise, before deciding what course of action to take.

When logging out in space, your ship (if not warp-disrupted/scrambled) will warp off to a random location and remain there for 1 minute until disappearing.

This timer will extend to 5 minutes if you were involved in combat with NPC ships.

It will get extended to 15 minutes if you were involved in pvp, whether it you being aggressive or being aggressed by someone else. Should your ship be destroyed during this time, another 15 minute timer applying to your pod will start.

You can make a maximum of 2 jumps through a specific wormhole in 5 minutes. If you try to jump a third time through the same wormhole inside those 5 minutes, you will receive a message informing you how long you have to wait before you can jump again.  This timer doesn't apply to jumping through different wormholes.

When you place or modify a buy or sell order in the market, you will not be allowed to modify that order or delete that order until 5 minutes have elapsed.

If you choose to terminate one of the characters owned by your account, it will enter the recycling queue for a 10 hour waiting period. When the 10 hour timer expires, you can complete the termination of the character and re-use the slot for a new character.