Difference between revisions of "Travelling to the NSC" 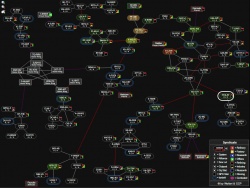 A map of the Syndicate region. The system where the NSC resides, is highlighted in a white circle.

This page contains many travel advice that a new member of the NSC can make use of to make that travel a bit more safe.

The Dangers of NullSec

When it comes to travelling through NullSec, Gates are very dangerous. Due to the mechanics of NullSec, or more accurately the lack of mechanics associated with NullSec, the majority of PvP occurs on Gates. The three main tactics that players will use to catch and kill you are Gate Camps, Bubbles and Smartbombs, likely using a combination of these. This page aims to describe these dangers in a little more depth, discuss how we can fit our ships and navigate NullSec to avoid them, and the best routes for players to make their way to the NSC.

Gate Camps are basically players waiting on a Gate to catch anyone who jumps through into them. There are a number of variables that determine how effective they'll be, such as the number of players involved, the types of ships they are using and the actual size of the Gate itself, but we can negate all of these. What we are concerned with is the time to warp of our own ship. Due to the way the server mechanics work, the fastest that anyone can get a point on a ship is 2 seconds. Therefore, if we can get our time to warp to be less than 2 seconds we are, theoretically, impossible to catch without the use of a bubble. We say theoretically because there can be the odd times were this doesn't work, such as if you are lagging, but 99% of the time you will uncatchable. This is also true for HiSec and LowSec.

Bubbles or to give them their proper name, Warp Disruption Fields, are unique to NullSec and WH Space. They can be created either by deployable structures or specific T2 ships and their primary function is to create a large sphere that will prevent any ship inside it from warping. They are usually placed to catch people who warp directly from Gate to Gate, although they can be placed on top of the Gate itself. For the purpose of travelling through NullSec, there really is not much else you will need to know about them. Bubbles are most dangerous if you find yourself inside one when you enter a system. If this happens, you can either burn back towards the Gate and hope that you are not killed before you get there or you can attempt to burn out of the bubble and warp off to safety. The majority of bubbles are placed off from the gate though and can be avoided by simply warping to a celestial or tactical first before warping to the Gate. The NSC has public tactical bookmarks for Unistas to use on the common routes through Syndicate, which will also allow players to avoid the majority of bubbles.

Smartbombs are a high slot module, often fitted to Battleships, that deal an area of effect damage. The benefit that smartbombs provide to Gate Campers is that they do not need to lock a target to damage their target. A Gate Camper will often sit with their Battleship aligned between two Gates and use D-Scan to tell when a weaker target is in warp to them, such as a Shuttle or a Frigate. They are one of the main reasons why we do not recommend using a Shuttle to travel to the NSC as you can be killed instantly. Another benefit for Gate Campers is that Smartbombs will also kill the targets pod before they can warp out. The two main ways to avoid Smartbombing is to use tactical bookmarks so that you do not land in the area of effect, and to ensure that you have at least a little tank fitted to your ship to survive should you somehow still find yourself inside the damage area.

Please do not attempt to move to the campus unless you are already accepted into Eve University, blue to the Ivy League alliance or you understand the risk of losing your ship and your pod to pilots from the Ivy League and/or other threats in the area, as we are a Not Blue Shoot It community. It is highly recommended that you come to the campus with an Intro to the NSC fleet if you find one being run, although everyone is free to travel by themselves if they choose to. The Introduction Fleet will explain in detail, as part of the lesson, how to travel safely in NullSec. When in doubt, please ask in NSC Standing Fleet chat, the 'NSC (EVE Uni)' chat channel, or in Mumble for advice or an escort. We will help you get to us.

Due to the dangers of travelling in NullSec, it is recommended that new pilots only bring themselves to the NSC initially. Without experience, players who try to move their own ships and assets to Syndicate are highly likely to lose them. The NSC offers instant reshipping contracts for new members to quickly buy a range of ships that fit within the NSC fleet Doctrines. The NSC also offers free Jump Freighter Transport to move assets from a number of different stations to Syndicate.

Due to the dangers associated with NullSec, there are limited options for moving quickly and safely between systems. The main Travel fits page has a wealth of information regarding fitting principles and it is highly recommended that new members to NSC read it however, for the purpose of your first trip into Syndicate, we have three options.

Attack Frigates, such as the Atron below, have the ability to align in less than 2 seconds and can be fitted with just enough tank to survive a Smartbomber. This is a great, low-skill method for travelling around not only NullSec, but HiSec and LowSec too. What this ship lacks though is an immunity to Bubbles and, because we are forced to use Mid-Slots for tank, it also lacks a prop mod for burning out of any Bubbles should you be caught. It is vitally important that players using Frigates make use of the NSC Public Tactical Bookmarks to avoid Bubbles at all costs.

Interceptors are the preferred method of fast travel through NullSec for one simple reason- Interdiction Immunity. An Interceptor is not affected by Bubbles at all. For players new to Eve, the skill requirements to fly Interceptors (Racial Frigate V and Evasive Maneuvering V) might appear long at first but the benefits gained are huge. The Raptor fit below is an excellent example of how an Interceptor can be fit to align in under 2 seconds, have enough tank to survive a Smartbomb or two, and have immunity to Bubbles, basically allowing it to move freely through any hostile space.

For the purpose of travelling, we will classify Covert Ops as any ship that can fit the Covert Ops Cloak. This utility high-slot module allows a ship to travel completely cloaked, including inside Bubbles. A Bubble will still prevent the ship from entering warp however, so pilots will need to manually fly out of a Bubble first then warp to a Gate Tactical Bookmark. While this does offer a high level of protection, a skilled Gate Camp can de-cloak a pilot. For those who can fly it, the Travel Interceptor is considered a better option over the Covert Ops.

Routes to the NSC

There are two main routes into the NSC's area of null security space from these locations:

Other routes should be avoided unless you know the area very well. In particular, avoid Orvolle/PF-346. Both of the low sec/null sec gates are frequently camped and for your first trip to the NSC you are strongly advised not to attempt to reach the campus unassisted.

This can only be done once per year, and so it is recommended to use the other methods.

This method will cost you a new medical clone, but it's safer and faster than traveling.