To reach their goals of victory and control over the invaded systems, the EDENCOM and Triglavian Collective made use of a number of specialized ships and structures only present in these systems. This page is an attempt to categorise them.

Invasion systems have roaming NPC fleets for both EDENCOM and Triglavian sides. These fleets will partrol on celestial objects and warp between them.

The fleets can be found on the following celestials:

The roaming fleets use advanced AI and will move in a group. One of the ships in the fleet is "commander" and all other ships in the fleet will position around it. This can result in odd looking behavior where short range ships stay far away when the commander has long range weapons or long range ships come close to brawl when the commander has short range weapons.
If the commander is killed a new ship will take its place. This can cause the fleet to suddenly change its behavior if the new commander wants to be at different range.

When in fight the roaming fleet may call for reinforcements.

Once sufficient number of ships from the fleet have been destroyed the fleet will disband. The remaining ships will warp to random directions and despawn.

Each race will use their racial EWAR and fit their ships with something that resembles racial T2 resists.

The Triglavian Collective ships come in all sizes, from frigates, destroyers, cruisers, battlecruiser and battleships, with even Dreadnaughts being a present in flashpoint sites during the advanced phases of the invasion.

With the three tiers, many hull-sizes and ewar-types, the Triglavian forces found can come in many variations.

When the invasion nears the second phase the winning side will start deploying industrial ships in the system. These will attempt to set up stationary weapons platforms on gates and stations. They will also try to anchor structures with system-wide buffs inside Stellar Fleet Deployment Site. They are usually escorted by a fleet of combat ships.

Destroying these industrial ships will be a heavy blow to the enemy.

The Triglavian Collective deploys three variants of the Dazh industrial ship to aid them in the invasion. These ships will be found roaming the invaded systems, as well as inside Stellar Fleet Deployment Site. Triglavian industrial ships deploy Entropic Disintegrator Werpost sentry towers on gates, stations, moons and asteroid belts.

The Triglavian industrial ships are:

The industrial ships from both sides will deploy stationary weapons to help their side achieve system dominance.

These are found inside the Observatory Flashpoint cosmic anomalies. Inside the EDENCOM forces has attempted to deploy Stellar Observatories near the stars in the invaded systems. The observatories are set up by CONCORD's Inner Circle and the DED High Command to analyze the various effects of Triglavian stellar manipulation and comparing them with the base condition of stellar bodies across New Eden.

They are vital to EDENCOM effort and the Triglavian Collective even considers deploying Dreadnoughts to destroy these observatories. 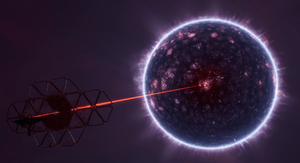 When a system reaches the First Liminality phase, a Triglavian Mothership will appear and deploy this megastructure at the star. Why the Triglavian Collective have deployed them and for what purpose are not yet known, but they appear central to the invasion efforts. They are capable of delving profoundly into the stars they are orbiting and appears to be changing the structure of them.

The destruction of these structures are of the highest priority for the EDENCOM forces and vital for the Triglavian Collective. 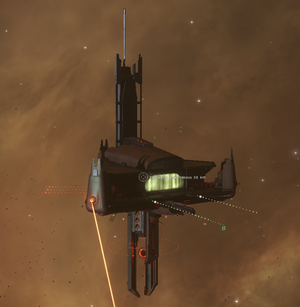 When a system reaches the Final Liminality phase and the Triglavian Collective has established total control over a system, they will begin to deploy mining stations throughout asteroid belts in the system. These structures serve as a processing and control center for the Triglavians effort in gathering material resources for the construction of other structures and fleet reinforcement in the system.

The destruction of these resource-gathering operations are of the highest priority for the EDENCOM forces.