What is a Killmail?

Killmails are generated every time a capsuleer ship is destroyed in EVE. They show a range of information about the ship's destruction, and are a good way to analyze how the ship was destroyed. Every time your ship is destroyed, or you deal the final blow to destroy another capsuleer's ship, a killmail is placed into your combat log, which you can then view at any time. 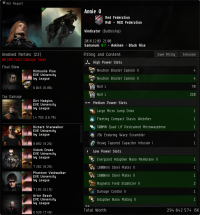 An example of a killmail

Killmails show a range of information, including:

The killmail will always show the corp and alliance that a capsuleer was in at the time of destruction. You can also quickly save the destroyed ship's fitting for later use, or to be exported to a fitting tool by pressing the save fitting button.

Where to find a Killmail 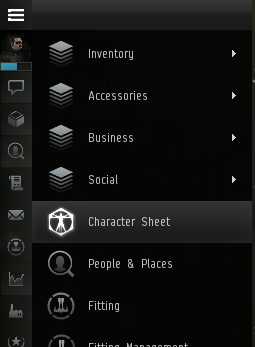 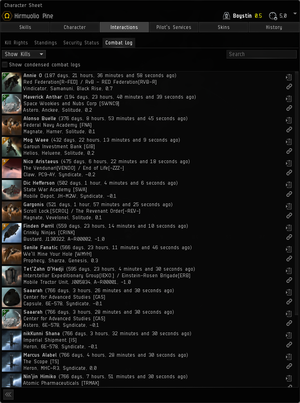 All of your killmails (either those that detail your destruction, or those which show your final blow on a target) are stored in your combat log. You can access them by opening the character sheet through the EVE menu or by clicking on your portrait in the Neocom, and then selecting the combat log tab. Here you can open a killmail by double clicking on it, or you can show the killmail to others by dragging the killmail to a chat window. This will generate a link to the killmail that anyone can open. You can also find recent killmails in which other members of your corporation inflicted the final blow by opening the Corporation window, selecting the Wars tab and then the Kill Reports tab. Use the drop down menu on this page to select between your corp's kills and losses.

Out of game Killmails

Killmails are also shown on public, out of game killboards, such as the one hosted by EVE University. There are also publicly available killoards, such as (Malicious Link Removed). On these killboards, you can see almost any killmail, as long as either the victim, the person who laid the final blow or one of their corporations has submitted their API to this killboard. Killmails can also be manually posted to killboards, by right clicking on the killmail in your combat log, selecting "Copy Kill Information" and pasting this into the Manual Entry page on the killboard.