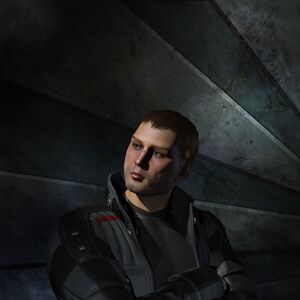 Ryan [1] was a previous member of E-UNI and is looking to return now that he has rejoined EVE.

He Can be found online at a wide variety of times. His timezone is UTC+4 (In summer due to Daylight savings time he is UTC+5).

In real life, Ryan is a 26 year old recent Collage graduate with a bachelors of science in Simulation and Digital Entertainment. Previously he has spent some time studying Architecture, Fine Arts (Sculpture Consintration), and Media Arts and Animation. He is from Baltimore, MD, USA and his actively working on achieving his dream to become a game designer. He is currently looking for work with a game company in the Baltimore Area. He would love the chance to work for a company like Bethesda Softworks [2] makers of Elder Scrolls and the latest Fallout games.

Ryan has been playing games for as long as he can remember, his first game was Super Mario Bros. His first personal game system was a game boy color and the game he played on it first was Pokemon Red. He has played many computer games and console games. Some of his favorites include: Star Wars KOTOR, The Sims Franchise, Age of Empires II, and Minecraft.

Ryan has completed Sisters of EVE Epic Arc [3] and can now be seen running missions at various locations (For security reasons, more information is not disclosed publicly)