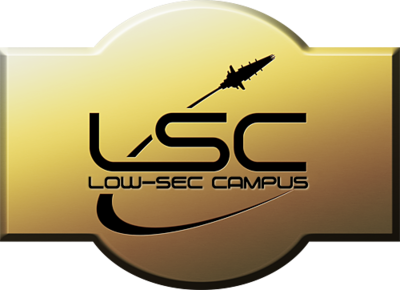 There are also several friendly industrial structures in neighbouring systems.

Vacant, Laura Karpinski is Acting Campus Manager until one is appointed.

LSC is open to all members to EVE University. There are no titles or skills required to join.

LSC is new player friendly, but we would strongly encourage you to have done the following before you join us:

WARNING: Do not attempt to move to LSC unless you are already a member of EVE University, or are in a corporation that has a non-aggression pact with Ivy League. LSC members (and other locals) will shoot unknown ships on sight, and will not know that you have applied to join us

To get to the campus:

The fastest route from HSC to LSC is 7 jumps through Low Security Space. Gatecamps are not uncommon, and you may encounter hostile fleets. However, if you travel in a frigate, especially a travel frigate, you can be relatively safe for the journey.

Until you are familiar with the area and the threats, you should ask for intel and eyes as you make your way into Low-Sec. Join the Low Sec Standing fleet, and ask in Mumble.

It's highly advisable that you use the GateCampCheck Website input your intended route and look for any red systems, If you do see any dangerous systems add that to the avoid list and generate a new route.

What to bring to LSC

For a new player, a tech 1 combat frigate with a micro warp drive is perfect. You should aim for a ship that can align quickly, so you can get out if you jump into a gate camp. There are no disruption bubbles in low security space, so you can normally fly gate to gate.

Once you are in LSC, members fly everything from frigates to battleships and the occasional strategic cruiser. Whatever you bring, you should ensure that that your ship is ready for PVP. It is advisable not to fly hauling ships as a new player. Make use of the free Campus Shipping Service to move your items, don't try to move them yourself unless you are experienced in hauling through low security space.

LSC has ships available for members to purchase on contract, and hangars stocked with commonly used items, including ammo. So don't worry about bringing everything you own, you can get stuff while you are here, and anything you need to buy can be shipped from Jita using the Campus Shipping Service.

You can take part in the following activities in LSC: