Difference between revisions of "Visual effects"

This guide is intended to introduce beginners to the visual cues EVE Online has for the various modules, so that you can recognise what's being done to your ship in combat (and hopefully, how to counter it). Each visual effect has an animated GIF illustrating what it looks like, however in case the animations do not load properly in your in-game browser each effect also has a link to a static picture as well.

The visibility of the armour repairer depends a lot on the ship. Some ships are easy to see repairing, others are not. For instance, this effect on the Hurricane (the ship in this animation) is not so easy to see in space, whereas this animation is very obvious on Amarr battleships due to their design.

You won't often see this in space, since hull tanking is daft. Whilst similar to the armour repair animation, it is greener and sharper, and the animations are faster.

The shield booster is the easiest of these three to see. One thing which sets this apart from the armour & hull repairers is that the animation is offset from the ship surface.

For all three, here is a still picture on a different ship: Media:CuesLocalreppers.JPG

Appears as a green and orange cone/cyclone which extends from the ship to the target. In this animation, the Hurricane on the right is repairing the Blackbird on the left. The remote hull repair module has exactly the same animation.

The shield transporter is seen as a blue star-burst and beam pointed at the target with a cone of blue rings moving towards the target. Again, the Hurricane on the right is repairing the Blackbird on the left.

For all remote repair modules, here's a still image: Media:CuesRemote.JPG

For each of these modules, the Hurricane on the right is activating the module, targeting the ship on the left.

For the neutraliser & nosferatu modules, here's a still image: Media:CuesRemote.JPG

This Picture illustrates the warp scrambler and the webifier in action.

The warp scrambler is seen on the left with the very faint blue cone extending from the ship towards the can.

The weibifier is seen as a small and faint star-burst effect around the targeted object. 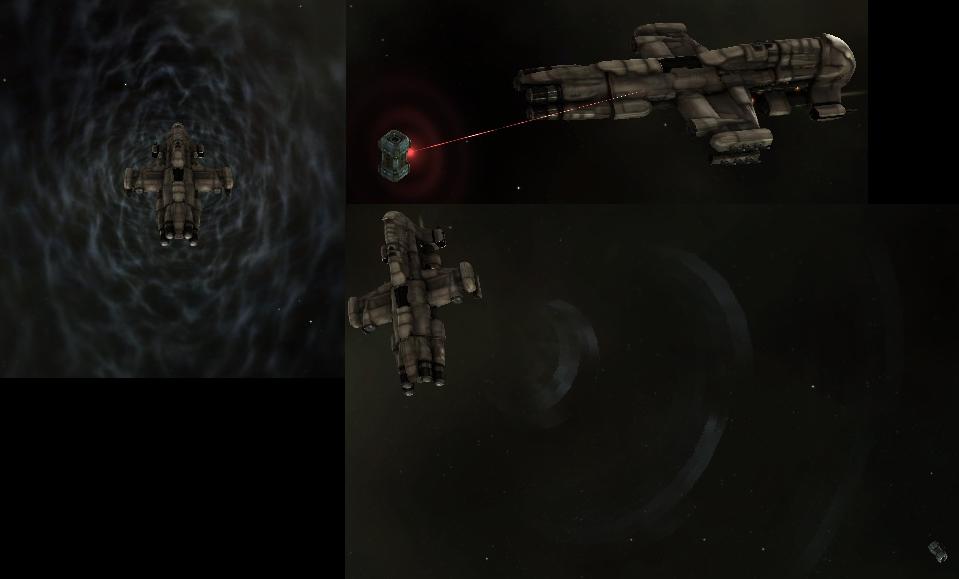 Seen here, clockwise from left, is the ECCM, target painter and tracking disruptor.

ECCM is characterized by a blue wave effect coming from the ship as if water.

Target painters are seen as bright red beams between the ship and its target.

The tracking disruptor, sensor dampeners and remote sensor boosters all share the same effect. A faint blue wave emanates from the user and extends towards the target.

A sensor booster increases a ship's targeting range and locking speed, making it easier to catch and pin down ships.