The Avoidance List is a feature of the in-game autopilot where the user can specify a set of solar systems, constellations, or regions to be avoided. When the Autopilot is told to avoid systems on the avoidance list, then when a destination is set, the Autopilot will try to find a route that does not include any systems, constellations, or regions on the avoidance list. This can be useful to prevent accidentally plotting routes through enemy territory, particular pirate-infested systems, or heavy lag systems.

The autopilot will not avoid systems on your avoidance list unless you turn on the Autopilot setting that orders the Autopilot to obey the avoidance list. You would usually turn this option off if you explicitly want to set a course into areas that you normally avoid without going to the trouble of erasing your Avoidance List altogether. To make sure that Avoidance List is being obeyed, first click on the A in the top lefthand corner of your screen. 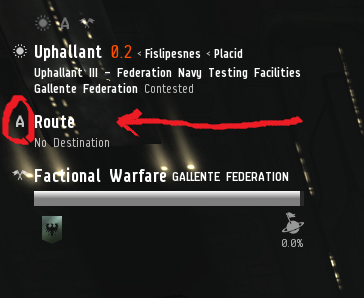 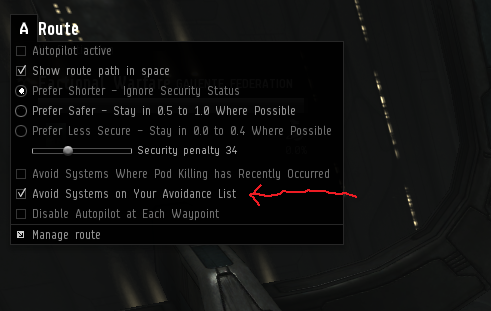 To see the list of areas you are avoiding, go to the Manage route item on the dropdown menu (A Route. top left of screen). 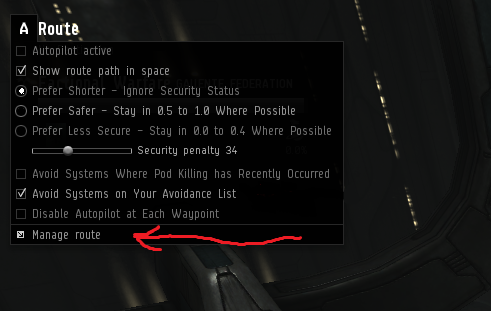 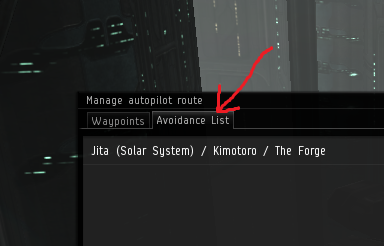 Jita, being a popular trade hub and so busy as to be extremely laggy, was probably added to your avoidance list automatically by CCP when you first started playing EVE Online. Let's suppose, though, that you need to make a shopping trip to Jita and that you don't normally mind going through LowSec space. (Maybe you have a fast frigate or a Tech 2 Transport Ship.) So, right-click on Jita and SET DESTINATION. 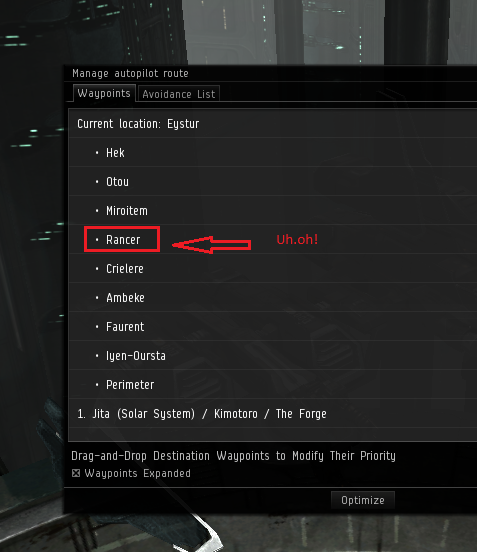 There's a problem, though. Your course goes through Rancer, and your fellow Unistas are telling you that going through Rancer is a bad idea because it's heavily gatecamped by expert pirates and that you will likely lose your ship and your pod. So, you need to find another route. (This isn't just an academic example, Rancer really is pirate-infested and has been for quite a long time as of the time of this writing.) Right-click on Rancer and select AVOID SOLAR SYSTEM. 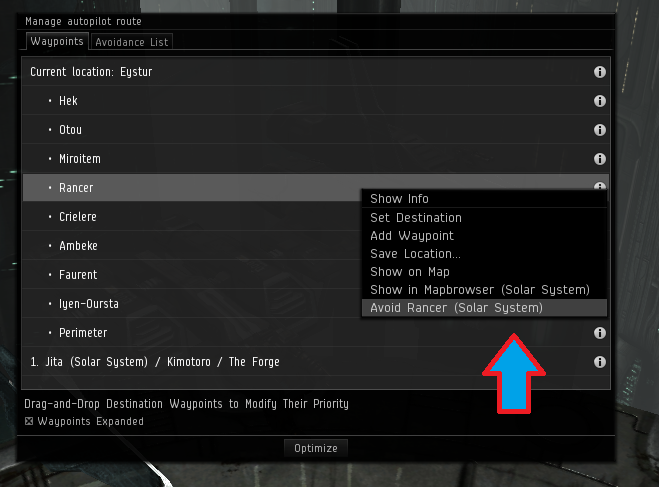 With Rancer now on the Avoidance List, the Autopilot sets a new course for Jita which is much longer, but doesn't go through Rancer. It only goes through one LowSec system, Olettiers (which you should exercise caution in anyway because it's just 2 jumps away from Rancer, so the Rancer gangs might still try to catch you in Olettiers.) 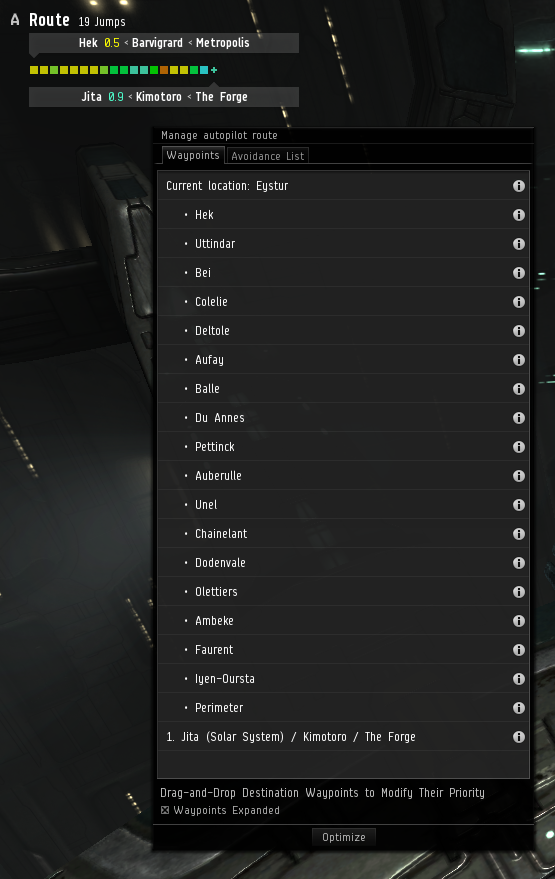 Right-clicking on a solar system in the Map will give you the option to add that solar system to your watch list. However, what if you wanted to avoid an entire constellation or an entire region without adding every single system in that constellation or region to your avoidance list? For example, [Sovereignty|Sovereign Nullsec] (Player-Claimable NullSec) can be considerably dangerous to enter under certain circumstances. Being able to set entire NullSec regions to your avoidance list would make it easy to set up your avoidance list to not plot routes through areas of space claimed by other player corporations or alliances. Let's begin by avoiding the Cache region (not to be confused with the cache of your browser).

Go to the WORLD MAP CONTROL PANEL (F10) and click the SEARCH tab, then type Cache into the search field. (Note: if you are using Map Beta, use the Search field in the Route Planner window.)

Click the SEARCH button or press Return/Enter on your keyboard. When the region Cache shows up as a result, right-click on the result and select AVOID REGION. Now go back to the AVOIDANCE LIST tab. You will now see the Cache region on your avoidance list, and it's unnecessary to add any individual systems within Cache to the avoidance region. This process may be repeated for each region you want to avoid. 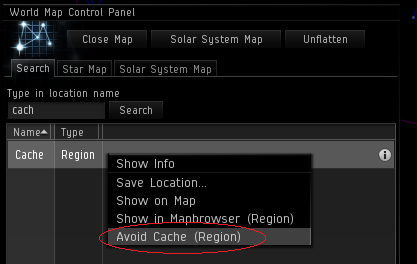 Pilots who wish to avoid player-sovereign space may wish to follow the above instructions to add the following regions to their avoidance list:

This is, however, not an exhaustive list of regions in which sovereignty can be claimed. For a more exhaustive list it is recommended to refer to the in-game map, with the various filters under the "sovereignty" menu, or to third party websites such as DotLan. Having those regions on your avoidance list will prevent your autopilot from setting a course to any player-sovereign system as long as (1) your autopilot is set to obey the Avoidance List and (2) the waypoint, itself, isn't a player-sovereign system one jump away from Empire space. (Remember that the autopilot will ignore whether or not a waypoint is on the Avoidance List; the autopilot just cares about whether or not there are systems leading up to the waypoint that aren't on the Avoidance List.) Once those regions are added to your avoidance list, your avoidance list should look something like this: 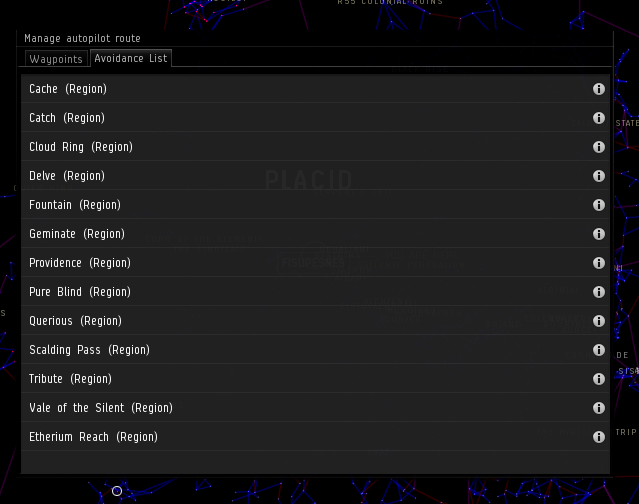 You may, at your own discretion, also have whatever other systems, constellations, or regions that you want on that list, like Jita or Rancer. For a list of systems to probably add to this list, see Known pirate systems.