This guide is intended to introduce beginners to the visual cues EVE Online has for the various modules, so that you can recognise what's being done to your ship in combat (and hopefully, how to counter it). Each visual effect has an animated GIF illustrating what it looks like.
However in case the animations do not load properly each effect also has a link to a static picture as well. (static images coming coon)

The visibility of the armour repairer in action is limited to damaged sections of the ships model.

You won't often see this in space, since hull tanking is daft. Whilst similar to the armour repair animation. It will be visible only on damaged sections of the ships model.

The shield booster is easier to see. One thing which sets this apart from the armour & hull repairers is that the animation is offset from the ship surface.

Colour of shield hardening depends on ships faction of origin.

Colour of armour hardening depends on ships faction of origin, not the module or the resistance type itself.

Colour of shield hardening depends on ships faction of origin, not the module or the resistance type itself.

Appears as a green and orange cone/cyclone which extends from the ship to the target. The remote hull repair module has exactly the same animation.

The shield transporter is seen as a blue star-burst and beam pointed at the target with a cone of blue rings moving towards the target.

Both warp disruption and warp scrambling effects are imitating cone-like radio weave signals extending from ship to its target.

The webifier doesn't have a ship-to-ship effect, just a kind of circular ripple effect around the target.


A sensor booster increases a ship's targeting range and locking speed, making it easier to catch and pin down ships.
It will also increase ships sensor strenght making your ship less susceptible to jamming.

Smartbombs are bad news unless it's you doing it.  Don't wait around to get blown up and podded. Smartbombs are bright and obvious - a huge explosion-effect centred on the ship.

Missiles, rockets and torpedoes go BOOM when they hit something.

There are three main turret types and each of them have two subtypes.
Distinct visual effects allow for easy identification.

Your ship shimmers before disappearing from view.

This shows as a fluctuating cone of light blue light towards the target bringing it closer to the ship.

A beam of white light hits the target and salvage process begins.

Survey Scanner (nearby asteroids are scanned)

Jump portals can be generated only by Black-Ops and Titan class ships. 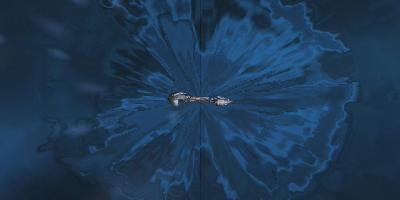 How actualy YOU will see when Jump Portal is active (most of the times, since animation is HUGE)

Black-Ops battleships, Jump Freighters and Capital-sized ships are capable of traveling to remote solar systems without the use of Jump-Gates.
All they need is Cynosural Field they can lock on to.