Phase Two of Project Discovery began with the July 2017 release. It was preceded by Project Discovery: Human Protein Atlas. Phase Two is a collaboration between CCP Games, Massively Multiplayer Online Science (MMOS), Reykjavík University and University of Geneva. Players analyse graphs for variations in a star's luminosity, possibly indicating the transit of an exoplanet.

In-game, results are submitted to the CONCORD Assembly and the project is supervised by Professor Michel Mayor's in-game avatar.

The project's background, from the devblog:

As part of this next phase of the project, pilots will be tasked with analyzing real-world astronomical data from the CoRoT telescope that was launched into outer space in late 2006 as part of its continued mission to discover extrasolar planets, or exoplanets.
Your contributions will be incredibly valuable to scientists, as the amount of data collected by the telescope is vast and computers are not yet capable of analyzing such large volumes of information in a reasonable time frame. The collective power of many human brains is still the fastest and most accurate way to analyze all this data. 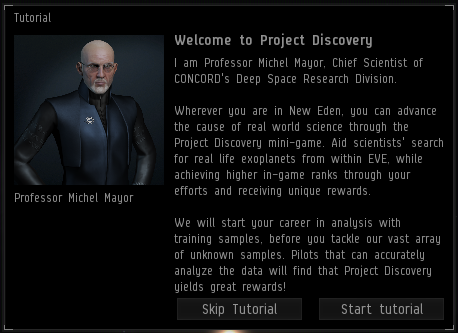 If a graph appears to contain a pattern of troughs, the player may mark it as a possible transit: they do this by clicking once on one of the troughs, and a second time on an adjacent trough. This opens up the opportunity to fold the graph, which layers the troughs over each other to make it easier to pinpoint their lowest point, and to increase or decrease the exoplanet's orbital period.

When the player's contributions are submitted for review, graph results are either definite or still reaching a consensus. The latter don't contribute to the accuracy rating, the former causes it to either increase or decrease slightly depending on whether the analysis failed or not.

The in-game tutorial may be recalled at any time by clicking on the question mark at the bottom-left corner of the Project Discovery tab. 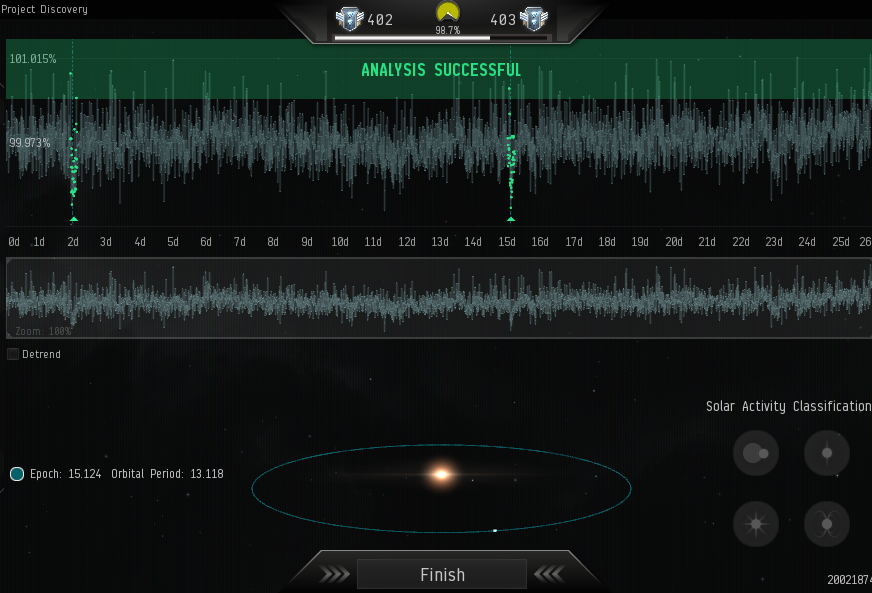 Graphs for which a consensus has been reached have definite answers: you can either fail or succeed at finding the transits.

Graphs that are still in the process of reaching a consensus do not affect the player's accuracy rating upon completion, but reward the same amounts of ISK and XP as a successful submission.

Currently, the maximum accuracy rating appears to be set at 99.00%, with 99,000 ISK being the highest amount that can be earned per solution. The first ten graphs of each day are awarded with double XP. In addition to tiered rewards, players also receive new titles as they advice: Novice Analyst, Intermediate Analyst, Superior Analyst and so on. There are two limits on solving puzzles. Firstly, if you submit too quickly, the Professor will tell you that you are moving too fast, and kick you out of the Project Discovery window. You can simply reopen the window and continue. The second limit is a per-day cap on submitted puzzles, which is roughly 300. Once you reach that cap, you may not submit any more until the next day (in Eve time). Reopening the Project Discovery window will yield the same lock-out message.

Each solution you give rewards you 10k*[Accuracy Rating] in ISK (rounded up) and experience points based on your rank and accuracy that counts towards your analyst rank.

There are additional rewards at specific analyst ranks: