Salvation Angel's Shipment is an expedition found by completing Angel Outpost combat sites. It may contain up to four parts, each of which will be about 4 jumps from the previous system. The first three will be in high-sec space, while the fourth will be in low-sec.

As soon as you warped in to the last room, your instruments registered a large group of ships escaping the fight in the last second. Further analysis of the data indicates this was a convoy of six to eight transport ships from the Salvation Angels, accompanied by an unknown number of combat ships. Your navigational systems have already come up with a likely location for you to get to, in case you feel you have any business with them. 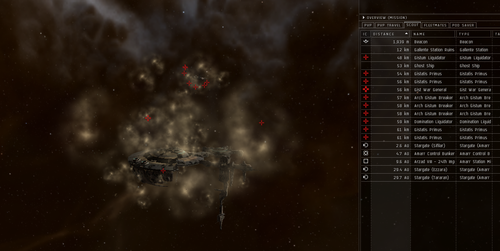 Taking out the Domination cruiser triggers the escalation. Assuming you always get a low bounty (and therefore short range) BS in the spawn, you can minimize DPS and fit for more gank by simply moving away from the BS after warpin. Even moving slowly you'll buy yourself enough time to take out all the BCs. The drake that had to warp in and out above had no trouble here.

Even though most of the convoy left before you even got there, you still have a good indication of where to follow them. 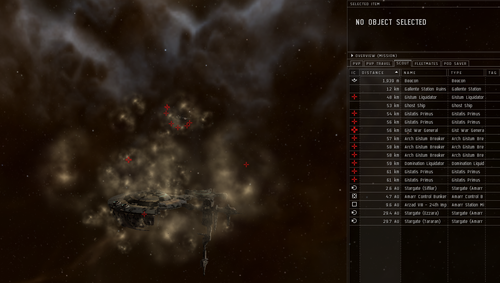 Despite their heavy ships, the Angels seem to be outmaneuvering you, getting away without a scratch. Your scanners have a new destination ready in few seconds... 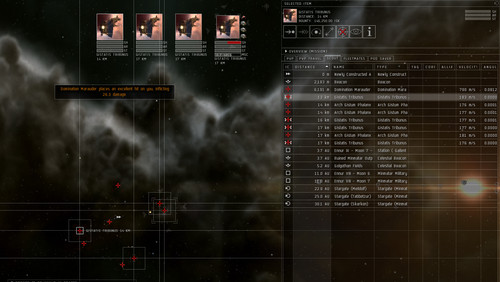 After this fierce fight you are relieved to see your instruments still have track on the main convoy which seems to still contain all of the original transport ships.

Upon clearing Gistum Domination Racer I got a completion message but no loot and Racer wreck yielded T1 salvage.