The idea behind this page is to present the gunnery information in Dinsdale's gunnery class in a readable and not too mathematical way.

Various helpful people in Chat.E-UNI and Command.ILN patiently explained how tracking and signature resolution work to me, repeatedly, and much of what hasn't been shamelessly plagiarised from Dinsdale is down to them. Errors and omissions (and I'm sure they exist -- please correct them) are my fault, not theirs. --Uryence 20:07, 3 April 2010 (UTC)

Could there be an inclusion of information on how skills affect damage for guns.

For instance if you have advanced autocannons IIs

do the following skills apply: 1. Gunnery: I assume yes. 2. Large Projectile turrets: Yes on T1/Faction; does it apply to T2s? 3. Large Autocannon Specialization: No on T1/Faction, yes on T2?

If question 2 is no on T2s how high does 3 have to be to eclipse the T1s? (Maybe it doesn't matter due to ammo selection?

Experiment to determine the damage interval around base damage

This test has too much data to show all of it here, so the method and the results will be presented instead. Should you wish to check for yourself feel free to follow this procedure:

A frigate (named 'Ouch') was abandoned at a safespot. An Osprey was fitted with lasers (infinite ammo, perfect for AFKing), a remote shield transfer and shield transfer drones. The guns and the ammo were chosen so that the damage would never go below 10.0 and to give as large of a damage interval as possible (an interval of at least 10.0 units (resistances must be accounted for) is needed to get a precision of at least 1% in the damage values) -- this ensured that the data would be good enough to draw accurate conclusions. The damage was only done to the shields, they where never allowed to drop below 25% since a bleed through into armor can happen that can mess with the observed damage numbers. Finally, the ships were positioned within optimal range and their speeds set to zero to ensure that the chance to hit is 0.50 = 100% and nothing less.

After 10,656 shots at the poor frigate, enough data was collected to make some conclusions about how the random damage distribution looks like. The data ends up in the My Documents\EVE\gamelogs folder (in Windows), and was easily copied into a prepared Excel sheet for analysis.

Analysis of the data and interpretation of some reduced frequencies of min and max results in the normal damage span:

The collected data shows that the normal damage is distributed within 50%–149%. Since the first 1% unit is used for critical rolls (this is most likely, if the last % unit was used additional calculations will be needed if the to hit chance is less than 1%), the constant added to the damage roll should be 0.49.

I did a test to verify that grouping has no effect on turret damage.

Shot at a ship inside optimal. Took damages for each shot from game log. Created quick histograms with MATLAB.

One turret has the flat distribution. 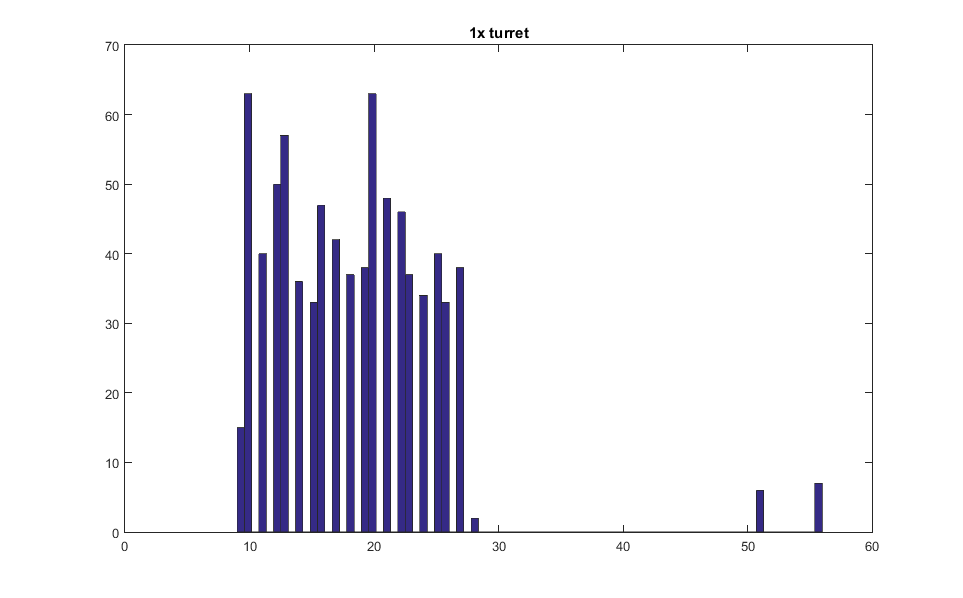 Three turrets grouped together form normal distribution. This is as expected with multiple separate random distributions together. 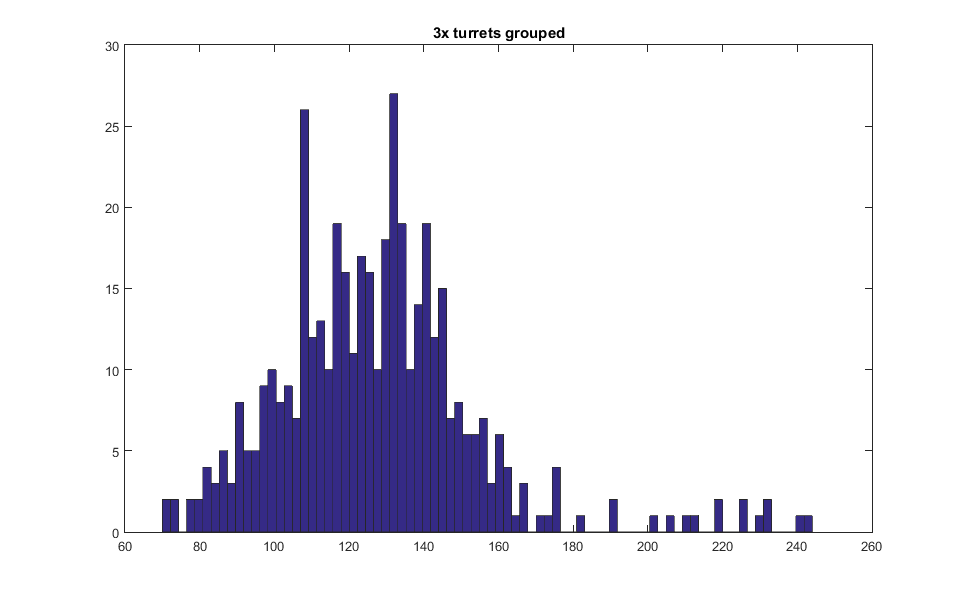