From EVE University Wiki
< UniWiki:Manual of Style
Jump to: navigation, search
This page is a part of the UniWiki's Manual of Style. It is a general guideline intended to harmonize article style across the UniWiki, though it is best treated with common sense, and exceptions may apply. Any substantive edit to this page should reflect consensus among Wiki Curators, or be approved by the Wiki Manager, Director of Communications, or CEO. When in doubt, discuss first on the talk page.

This page gives an overview of how images are used in Wikipedia; for more information, see Wikipedia:Image use policy and see Wikipedia:Help:Files on how to upload and include an image. 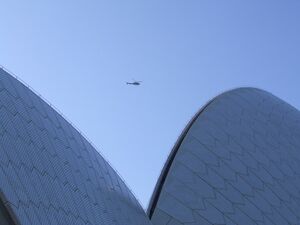 This image adequately shows neither what a helicopter is, nor what the Sydney Opera House looks like.

Images must be significant and relevant in the topic's context, not primarily decorative. They are often an important illustrative aid to understanding. When possible, find better images and improve captions rather than simply remove poor or inappropriate ones, especially on pages with few visuals. However, not every article needs images, and too many can be distracting.

Images should look like what they are meant to illustrate, whether or not they are provably authentic. For example, a photograph of a trompe-l'œil painting of a cupcake may be an acceptable image for Cupcake, but a real cupcake that has been decorated to look like something else entirely is less appropriate. Similarly, an image of a generic-looking cell under a light microscope might be useful on multiple articles, as long as there are no visible differences between the cell in the image and the typical appearance of the cell being illustrated.

Strive for variety. For example, in an article with numerous images of persons (e.g. Running), seek to depict a variety of ages, genders, and ethnicities. If an article on a general already shows its subject in uniform, two more in-uniform portraits add little interest or information; a map of an important battle, and an image of its aftermath, would be more informative. Resist the temptation to overwhelm an article with images of marginal value simply because many images are available.

Poor-quality images—dark or blurry; showing the subject too small, hidden in clutter, or ambiguous; and so on—should not be used. Think carefully about which images best illustrate the subject matter. For example:

An image sometimes includes a familiar object to communicate scale. Such fiducial markers should be as culturally universal and standardized as possible: rulers, matches, batteries, playing cards, pens/pencils, CDs/DVDs, soda cans, footballs (soccer balls), people, vehicles, and famous structures such as the Eiffel Tower are good choices, but many others are possible. Such objects as coins, banknotes, and sheets of paper are less satisfactory because they are specific to given locales, but may be better than none at all since at least the general scale is still communicated.

Quantitative data, if available, should still be given in the caption or the article.

The UniWiki is not censored: its mission is to present information, including information which some may find offensive. However, a potentially offensive image—one that would be considered vulgar or obscene by typical UniWiki readers—should be included only if it is treated in an encyclopedic manner i.e. only if its omission would cause the article to be less informative, relevant, or accurate, and no equally suitable alternative is available. Controversial images should follow the "principle of least astonishment": images should respect conventional expectations of readers for a given topic as much as is possible without sacrificing the quality of the article. Avoid images that contain irrelevant or extraneous elements that might seem offensive or harassing to readers; for example, photographs taken in a pornographic context would normally be inappropriate for articles about human anatomy.

Images for the lead

It is common for an article's lead or infobox to carry a representative image—such as of a person or place, a book or album cover—to give readers visual confirmation that they've arrived at the right page.

For some topics, selecting the lead image can be difficult. While the UniWiki is not censored, lead images should be selected with care. (See Offensive images, above.) The lead image is perhaps the first thing to catch the reader's eye, so avoid lead images that readers would not expect to see there. Unlike other content beyond the lead, the lead image should be chosen with these considerations in mind.

On some mobile platforms an article's first image may be displayed at the top of the article, even if it appears well into the article in the desktop view. When placing images consider whether this phenomenon may mislead or confuse readers using mobile devices.

Sometimes an image is removed from articles in favor of an image of higher quality or greater pertinence, or with a friendlier licensing status. However, such superseded images should not be deleted, so that the UniWiki's historical record is preserved; the history of articles becomes confused if disused images and templates are deleted.

How to place an image

See Wikipedia:Extended image syntax for further features and options. If the image does not display after you have carefully checked the syntax, it may have been blacklisted.

An image should generally be placed in the most relevant article section; if this is not possible, try not to place an image "too early" i.e. far ahead of the point in the text discussing what the image illustrates, if this will puzzle the reader. An image causes a paragraph break (i.e. the current paragraph ends and a new one begins) so it is not possible to place an image within a paragraph. (This applies to thumb images; small inline images are an exception (See Inline images, below).)

Avoid referring to images as being to the left/right, or above/below, because image placement varies with platform (especially mobile platforms) and screen size, and is meaningless to people using screen readers; instead, use captions to identify images.

All images should comply with Wikipedia's image use policy: in general, they must be free for reuse, including commercial use and use after alteration, though some "fair use" of non-free content is allowed in limited circumstances—see Wikipedia:Non-free content.

Search for existing files through:

You may upload photographs, drawings, or other graphics created with a camera, scanner, graphics software, and so on. When photographing or scanning potentially copyrighted works, or creating depictions of persons other than yourself, be sure to respect copyright and privacy restrictions.

In order to maximize images' usefulness in all languages, avoid including text within them.

Finding images on the Internet

An extensive list of free image resources by topic can be found at: Public domain image resources. Several other useful, general purpose image search engines include: Google Image Search, Picsearch and Pixsta. Creative Commons licensed images with Attribution and Attribution-ShareAlike as their license may be used on the UniWiki. Images with any license restricting commercial use or the creation of derivative works may not be used on Wikipedia.

The Creative Commons site has a search page that can be used as a starting point to find suitably licensed images; make sure you check both the checkboxes "use for commercial purposes" and "modify, adapt, or build upon".

An image's utility or quality may be improved by cropping (to focus on the relevant portion), cleaning up scanning artifacts, correcting color balance, removing red-eye effect, or other adjustments.

The caption of an image should mention such edits (e.g. introduction of false color or pseudocolor) if a reader needs to know about them to properly interpret the image.

Edits that improve the presentation without materially altering the content need not be mentioned in the caption e.g. rotation to correct a slightly crooked image, improvement to the contrast of a scan, or blurring a background to make the main subject more prominent. (However, all changes to images taken from outside sources should be noted on the image's description page. For images created by editors themselves, changes which could have been part of the image's original composition—such as rotation or minor cropping—need not be mentioned on the description page.)

Images should not be changed in ways that materially mislead the viewer. For example, images showing artworks, faces, identifiable places or buildings, or text should not be reversed (although those showing soap bubbles or bacteria might be). Do not change color integral to the subject, such as in images of animals. It is usually appropriate to de-speckle or remove scratches from images, though that might be inappropriate for historical photographs.

All users can upload media to the UniWiki. For preferred file formats, see: Wikipedia:Preparing images for upload.

Each image has a corresponding description page, which documents the image's source, author and copyright status; descriptive (who, what, when, where, why) information; and technical (equipment, software, etc.) data useful to readers and later editors.

To maximize the utility and educational value of an image, please describe its contents as fully as possible on the image's description page. For example, photographs of artwork benefit from documentation of the artist, title, location, dates, museum identification numbers, and so on. Images that are described only in vague terms (for example, "a cuneiform tablet" or "a medieval manuscript") are often less useful for Wikipedia and less informative to our readers.

Reliable sources, if any, may be listed on the image's description page. Generally, Wikipedia assumes in good faith that image creators are correctly identifying the contents of photographs they have taken. If such sources are available, it is helpful to provide them. This is particularly important for technical drawings, as someone may want to verify that the image is accurate.

Description pages for images are rediscovered by editors using the search engine and the categories. To help editors find precise images, please remember to document the image description page accordingly. Well-categorized and well-described images are more likely to be used.

Images can greatly increase the bandwidth cost of viewing an article – a consideration for readers on slow or expensive connections. Articles carry reduced-size thumbnails instead of full images (which the user can view by "clicking through" the thumbnail) but in some file types a thumbnail's reduced dimensions doesn't translate into a concomitant reduction in file size. (In most browsers you can see a thumbnail's size by right-clicking for its "Properties".)

If one image's file size is disproportionate to those of others in the same article, you may want to reduce it by selecting a different file format: