Open Broadcaster Software (OBS) is a free and open-source cross-platform streaming and recording program built with Qt and maintained by the OBS Project. As of 2016, the software is now referred to as OBS Studio. There are versions of OBS Studio available for Microsoft Windows, macOS, and Linux distributions. OBS is funded on Open Collective.

Download the software directly from https://obsproject.com/. Read the OBS Wiki for a quick start guide.

Make sure OBS can access the main audio input and output for your computer (File -> Settings -> Audio):

You can test if the settings are correct when you set up a new scene (see below), as the default audio devices are added automatically to the audio mixer and should show the appropiate audio levels. You might have to unhide the desktop audio meter via right click first. Note that the desktop audio is a mix of everything that is played on your computer, so if you want to seperate the audio streams later you will have to mute that one.

To not continually record every sound around you it is recommended to activate push-to-talk and assign it to the same button you use for mumble:

The Push-To-Talk key can be configured in the "Hotkeys" menu:

Note that you can assign multiple buttons to the same function, so you can bind your PTT-key as well as your whisper-key. It is even possible to set these keys as a Push-To-Mute for the game audio, so every time you speak the game gets automatically muted.

A scene is a collection of input streams and resources that make up what you want to record. Add a new scene to the list by clicking on the '+'-sign in the "Scenes" window. Name it in a way you remember what is being displayed/recorded.

Now we have to add the things that need to be capturered under the "sources" window. 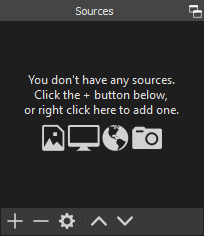 The most important input will be the game screen. Since we dont want to record our desktop we have to tell OBS to only capture windows that belong to the EVE client, so click the '+'-sign to add a new source and select "Game Capture". Name it and select OK; a new option screen will pop up. 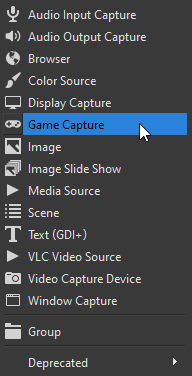 We are going to assume that the game is played in windowed fullscreen mode, which would allow for easy multiboxing and switching between applications over multiple screens. Other modes would work similarly with these settings. It is important that the game is actually running with the desired character so OBS can save the selection and differentiate between additional multiple characters logged in. Chose "exefile.exe" as the EVE game client with the desired name of the character at the end. Chose "Match title, otherwise find window of same executable" for a graceful fallback if the initially selected character is not online and you still want to record with a different one. It is important to activate "Capture third-party overlays (such as steam)" to record the mumble overlay and see who is speaking in the video. This can help immensely with the analysis of combat scenes and their communication situation.

This is the part that can be a bit tricky to set up, depending on the system. Windows does not allow for audio routing like Linux does, so is by default limited to a single input and output source. That means that if the game and mumble audio is to be captured, all of the system audio needs to be included. This can be solved by installing audio routing software like VOICEMEETER.

By default the Mic/Aux mixer has already been added to the Audio Mixer window. Currently everything said is being recorded, but this can be changed to push-to-talk (PTT).