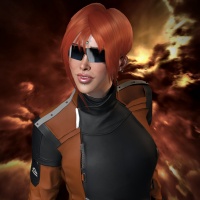 Call me Lira or Lel for short. I'm just a Galle who flies Amarr For the Empress and Gallente to uphold the self-evident truths of everyone to armour tank and use drones.

If you know me from outside EVE you can be a pal and call me "Bracky". My MMO profile on twitter is @CirimCollective. I have a basic Evelopedia user page too.

Game Mechanics: I love understanding how games are designed and how they work, from a rules and ludology standpoint. We can call it "PvD", player versus developer. I care less about my killboard stats than I do about understanding why the killboard API can say Verified and still give inaccurate information. I would certainly not turn down the opportunity to work at any game developer, but not necessarily in a development role. Because gamers are entitled jerks.

Learning: Being a generalist means I love to understand the broad brush of a complex game like EVE. Even if I'm not an expert I like being aware of everything at some level.

Chatting: I spend a large amount of EVE time typing with players and even applied once for ISD Star. I'm very quiet on comms but love making myself and others fall out of their chair laughing in various channels and on the forums.

Teaching: My role in the Uni has been focused on acquiring and disseminating knowledge. In particular since I don't focus on combat I prefer approaching topics of game design and OOG activities. My lectures:

Wikis: I have a degree in Library and Information Science, and many years of experience working on many wikis across the internet. Here are my major contributions for the UniWiki, and my significant works in progress.

Events: I can be proud of some direct involvement in facilitating and/or instigating: