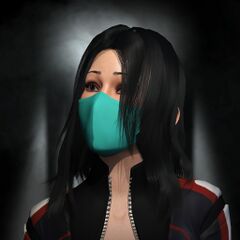 Nienke Solette is a current member of Eve University. She lives in The Netherlands.

Nienke joined Eve University on the 22nd of August 2019 where she immediately joined High Sec Campus. She is interested in many things and trains in a broad spectrum of Skills. This is consistent with her activities. She regularly organises and participates in fleets. First, as part of her training in the Fleet Command Course. After the management change on the 4th of July 2020 as Senior FC and since 06-01-2021 as FC Manager.

Nienke is active at multiple campuses across Eve University. She started participating in the Cross Campus Initiative on the 7th of September 2019 and completed it on the 28th of May 2020. Other interests and activities include Exploration, Security missions, Abyssal Deadspace and Incursions.

Nienke became a Personnel Officer on the 12-12-2019 and got stuck right into processing applications and performing interviews. She was fortunate enough to make lots of very good friends in the Personnel Department, and on 20-03-2020 was promoted to Senior Personnel Officer. After becoming the FC Manager on 06-01-2021 she stepped down.

With the restart of LSC in January 2020, Nienke planned on moving in the months following. After being asked for LSC PvP Officer and the developments around the COVID-19 virus, she accepted the position on 18-03-2020 on the condition that she would gradually invest more time to the LSC depending on her CCI and FCC progress. Her goals: encouraging PvP within LSC and across EVE-University as a whole. After completing the Cross Campus Initiative she officially moved from HSC to LSC. On the 4th of July 2020, the change to the management structure of EVE University meant that the specific PvP part of the Campus Officer position would be more generalised. On 26-08-2020 she became the LSC Manager.

On 29-03-2020 Nienke succeeded Turlough Dominian as the Events Manager under the directorate of Psychotic Fickity. The position is a good combination with her other activities since it opens up more means to facilitate and encourage playing EVE Online and help players with participating and organising events. On the 4th of July 2020, the change to the management structure of EVE University resulted in the dissolvement of the Events Department. With this, the Events Manager postition ceased to exist.

Considering the progress in the FCC, Nienke was asked on 11-04-2020 to come aboard the FCC program as an officer. Her main tasks for the FCC is to help new FCs into their first fleets and give feedback on their first steps into FCing. Furthermore, she aims to provide valuable feedback on the syllabus and education within the FCC. On the 4th of July 2020, the change to the management structure of EVE University meant a big change, where the FCC was rebooted. Since that day, Nienke became one of the Senior FCs of EVE University. On 06-01-2021 White Orchid stepped down as FC Coach, after which Nienke took over as FC Manager.