What you need to know about entering warp

The second important aspect of entering warp is the physical distance your ship moves between the time you press the "warp" button and you actually enter warp. There are two instances where this distance is important:

In order for your ship's warp drive to activate, it must have a positive Warp Strength. Almost all ships have an inherent Warp Strength of 0. As long as there are no warp disruption modules active on them, they can enter warp.

The effect of the Warp Disruptor module is to reduce your ships's Warp Strength by 1. For most ships, this reduces there Warp Strength to -1, thereby preventing the warp drive from activating (or turning it off if the ship is "aligning" out).

The Warp Scrambler module is more powerful in this regard, reducing the Warp Strength of a ship by 2.

There is also a module called the Warp Core Stabilizer that can increase the Warp Strength of a ship by 1 per module, offering defence agains warp disruption and scrambling.

Interdiction Spheres (i.e. bubbles) reduce the Warp Strength of a ship by an infinite amount (i.e. it is impossible to warp while in a bubble unless you are in a ship with an interdiction Nullifier, like an Interceptor or a properly fit Strategic Cruiser). See Warp disruption for more details.

What you need to know about exiting warp

The most important aspect to understand about exiting a warp is the fact that you will not exit directly at your exit point. You will always exit warp in a random direction, 2,500 meters from your actual exit point. To see this for yourself, do the following:

This curious effect of exiting warp at a random direction from the actual exit point has two major consequences. The first is related to how EVE handles geometry of objects in space and the second has to with how exiting warp interacts with interdiction spheres (i.e. bubbles). 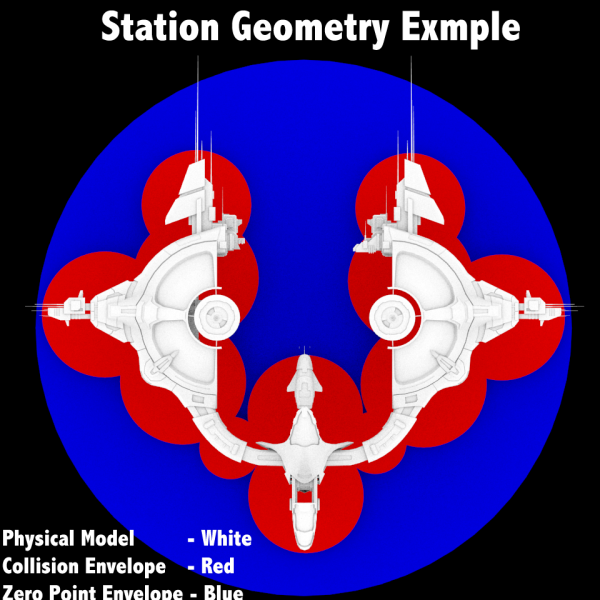 While in space, all objects have three models that describe their dimensions. First is the physical model (what you see, represented in white in the diagram). Most objects are simple, and the three models are actually the same. Some objects are more complicated though…most notably stations and jump gates. When you look at a station in space, you will notice that they tend to be very intricate in their physical models with lots of bulges and spires and such. Although beautiful, these highly complex models are extremely hard to accurately interact with quickly. For example, detecting when a ship has collided with a model takes a lot more processing time the more complex the model is. For this reason, CCP has created two simplified models for interaction purposes.

This second model has been simplified to make processing of collisions faster. This model is known as the Collision Envelope (shown as Red in the diagram). The client will detect a “collision” with the object when a ship hits this area. You will notice this ares is fairly similar in shape, but is not nearly as detailed as the physical model.

The third model is an even more simplified model that represents the area that will show a distance of zero to the object in the overview. This is know as the Zero Point Envelope (shown in Blue).

NOTE: This diagram is an approximation of the dimensions of station geometry. It is simply a visual aid for seeing the various parts of geometry for large structures. See Station Geometry for more accurate details about stations.

What you need to know about EVE Geometry

So, why is this knowledge of the geometry of objects in space important? Simple. When you warp to zero on an object in space, your Warp Exit Point will be the nearest point on the Zero Point Envelope to your Warp Entry Point. Remember, you actually exit warp in a random direction 2,500m away from your actual Warp Exit Point. This means that you can actually exit your warp anywhere from 2,500m inside the Zero Point Envelope to 2,500m away from the Zero Point Envelope. This fact is extremely important when you consider the “activation range” of various objects. For example, you can activate a jump gate if you are within 2,500m of it. Meaning that no matter where you actually exit, if you warp to zero on a jump gate, you will be able to automatically jump as soon as you land.

This effect on docking is the primary reason everyone should create an instant docking bookmark for any stations that they frequent, especially if you fly large ships. The instant docking bookmark needs to be located more than 2,500m INSIDE the Zero Point Envelope AND more than 2,500m OUTSIDE the Collision Envelope. When set up properly, your ship will always exit warp inside the docking ring and never get “bounced” by the Collision Envelope. By the way, capital ships appear around a cyno in exactly same way that ships exit warp (except at 5,000m in a random direction from the center of the cyno). This same bookmark is very useful as a position to light a cyno, as it lets capital ships instantly dock in the station.

Up to this point, we have assumed that when you warp to an object, you will land at your object. This is not always the case. When you are exiting warp, there is an invisible line along your direction of travel that is 150km long and that has your intended warp exit point in the middle. However, if any part of this invisible line intersects an interdiction sphere (i.e. a warp bubble), your Warp Exit Point will MOVE to the surface of the interdiction sphere. This means that when you exit warp, you could be a very long way in front of (or behind!) your intended target. It is for this reason that people almost never warp to zero on any permanent objects in Null/Wormhole space. They always set up tactical bookmarks that are more than 150km away from common warp to objects (gates, stations, etc…) that are also not in line with anything else. That way they can warp to a position that is “on grid” with there destination and (hopefully) not inline with a bubble.