Difference between revisions of "The Rookie's Guide to Fleet Ops" 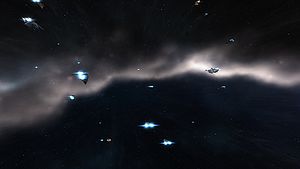 Fleet Operations happen daily in Eve University, and for rookie pilots, it may be tough to catch on to how we operate and the terminology involved.

While this guide is not intended to replace a proper fleet operations class, its purpose is to:

Do not ask questions about whether any fleets are forming, or about any fleets in the process of forming, in Chat.E-UNI or Alliance chats.  Questions specifically about fleet formation go in Corp chat, or Mess.ILN if you prefer.

It is absolutely essential for you to be on Mumble for fleet operations. If you're not on Mumble, you cannot join or follow the fleet. The Fleet Commander (FC) does not have time to type everything out or issue broadcasts.  Assuming you have set up your Mumble account correctly, you can log in and move yourself to the Combat Lounge (PvP Waiting) channel where many potential PvP pilots hang out and discuss fleets, etc.


Once you are in a fleet, move yourself to the appropriate wing channel in order to hear communications with your fleet. Stay silent until the operation is over and the Fleet Commander declares open mic. Small gangs are often less strict about voice comm discipline; however in large fleets it is impractical for everyone to have authorization to speak. Make sure your Mumble settings are set up correctly. This mostly means you have a push-to-talk button (PTT) set and not voice-activated.  Also, make sure your push-to-talk button is not any button you would use for anything else - we don't want to have to hear you breathing, and we don't want to hear the clicking of your keyboard when you type an email either. Set your push-to-talk key correctly.

Disable Mumble sound notifications: In the Setting screen Configure Settings you can find Advanced settings check-box in the bottom left corner. With it checked you can access the Messages settings. From there you can disable popup and sound notifications about events you don't care about. Sound notifications can be loud and prevent you from hearing the FC, especially with a lot of people in Mumble connecting and disconnecting.


Do not talk on Mumble unless you have authorization during a fleet op.

Do not go into a fleet operation channel unless you are in the fleet. If you go into fleet op channels without authorization, you will be unregistered and kicked from Mumble.

The fleet roster should be changed to hierarchy view. This can be done by opening the Fleet section in the NeoCom. Click the arrow at the top left of the window, and select "view as hierarchy". If there is only the "view as flat list" option available, the roster is already displayed as a hierarchy.

The squad number displayed in the fleet window title bar is often wrong, due to a persistent bug. Make sure that you always check the fleet hierarchy to make sure you know which squad you are in.

More information about the Fleet window can be found in the Fleet User Interface guide.

The Fleet Watch Lists is one of the most important tools of navigation during a fleet operation, often used by rookies to warp to the fleet when lost. Your fleet or squad commander will let you know if he or she wants you to put anyone specific in the watchlist. You may want to add the FC and squad commander to the list and leave other spots open.

Warp Yourself To
The FC will tell the fleet to click the "Warp To Zero" button themselves (or sometimes say "Warp to your optimals" meaning right-click on the destination and select "Warp to -> Within x KM where "x" is the optimum distance for your role) instead of aligning and being warped by a Commander. This is usually used from the POS or warping to an engaged fleet member.

Align
The FC will tell the fleet to align to stargates, and once everyone is aligned, will warp the whole fleet. The align button is right next to the 'Warp To 0' button in the Selected Item window. Make sure you don't confuse the two.

Jump Jump Jump
Jump into next system via stargate.

Jump On Contact
This means when you drop out of warp, immediately jump into the next system when you reach the stargate.

Hold On Contact
This means do NOT jump into the next system when you drop out of warp. The FC may be waiting for additional intel from the scouts.

Offensive Gatecamp
An offensive gatecamp is formed with battlecruisers and larger ships tucked into the gate at 0 and cruisers and smaller craft orbiting the gate between 1000-2000m (it's easiest to right-click the gate and select orbit at 1 km, do not select orbit at 2.5 km or you will be thrown out of jump range). The reason this is 'offensive' is that it allows for the fleet to remain mobile, able to jump through the gate in pursuit of an enemy. It sacrifices depth and effectiveness for mobility and flexibility.

This is usually the default order when landing on the gate, hold on contact and establish an offensive gatecamp, unless the FC says otherwise.

Defensive Gatecamp
Mainly used for actual defensive purposes or stationary ambushes, the fleet will set up with tacklers orbiting at 1000-2000m and all other craft spread in a sphere around the gate at their optimal ranges. This puts EW and snipers in their best positions, spreads the fleet out and puts the fleet at 100% effectiveness for range. It is not suited for mobility however, since most ships will require warping to a celestial object and then back in order to jump through the gate. Useful for when you know the enemy is coming to you, such as when the enemy has entered the Aptetter cluster and you are camping the Aldrat gate in Eygfe.

When selecting an orbit distance, keep in mind that gate axis varies from 5 to 50 km wide, and ships can come out up to 15 km beyond that. Most gates have a 5 km axis, constellation and region gates can be larger. You can right click a gate, do show info, and click on the green eye to see its size. Non-sniper damage dealers should stay within 1 to 5 km of the gate in most circumstances (and try not to get caught on the gate while approaching any hostiles), and EW should keep a certain distance but not too much (use your best judgement based on gate size, your EW optimal, and falloff).

Make Best Speed
This order means the fleet is no longer trying to move as a coordinated fleet through each system. When chasing WTs, the FC could give tacklers the order to make best speed for a destination to catch them, before the slower ships can catch up. The Make Best Speed order can also be given when the op is finished, and destination is set for home.

Scatter
This is for when things go wrong. The FC can give the order for the whole fleet to scatter. Go to your Pod Saver tab, select a random planet, and warp out. This order can also come in the form of "get out", or "warp out", etc. The FC should normally repeat the order and clarify if it applies to the whole fleet to avoid confusion.

There is usually a standing order to save yourself when you are taking heavy damage. If you see your shields and armor getting smoked, feel free to bug out. Denying the enemy the kill is usually more important than whatever you're doing, except perhaps if you're the only tackler on the primary and you'd like to risk waiting for other tacklers to catch up.

Hold Cloak
When you jump into a system through a stargate, you stay cloaked for 60 seconds (or seemingly less if you took a long time to load the grid). It is important not to move until the FC gives the order to align, orbit, or whatever else.

There are a variety of timers that anyone involved in PvP should know about. Foremost among these are the 1-minute timer after initiating aggression and the 30-second timer after losing a ship which will prevent docking in stations and jumping through stargates.

Read this wiki's timers and countdowns guide for more information.

A common tactic used by our opponents is to fit a high damage ship such as a Battleship or a T2 Heavy Assault Cruiser (e.g. Eagle, Muninn, Zealot) with extremely long range weapons and then warp to a bookmark that puts them a fair distance from the fleet (typically >100km away). They will then proceed to sit at long range and snipe at smaller and less well-tanked ships such as frigates, interceptors and some (especially EWAR) cruisers.


If you are in a ship such as these you should be aware of this tactic - if a possible sniper warps to a gate camp at range be ready to either warp off to a random planet or jump through the gate if you are targetted - or even before if you have an exceptionally thin tank and are susceptible to being alphaed.  Unless the fleet commander has specifically ordered otherwise, it is normally acceptable to jump through a gate or warp away like this to save your ship in these situations.

Do not ask for information about the fleet location, nor destination. Intel is on a need-to-know basis. If you don't know, you probably don't need to.

Do not give out your location in Alliance, Corp, nor Chat.E-Uni channels. You may specify your location in the squad channel, and if the rally point is in a different system, ask your squad commander for instructions. This is also true if you are requesting a pickup. If you give your location anywhere that is not a private chat, the fleet would be in danger if they picked you up, and thus will not pick you up. 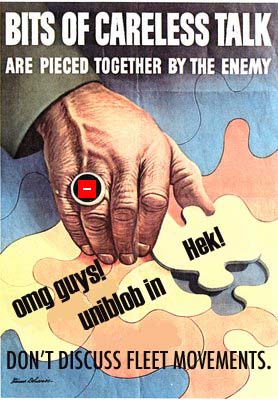 If you got podded, buy a new medical clone before leaving the station.

If you picked up loot or salvage, it is your responsibility to put it in the correct place. Loot from university ships should be returned to their owners, and enemy loot is normally donated to the university's "Restricted" Hangar - though the FC may specify his or her own looting rules. Loot picked up during wartime must always be placed in the ILN Hangar at HQ.

If you get a killmail, post it to the killboard. As per Ivy League Policy, if you are the recipient of a kill or loss mail, you must comment it. How to Post A Killmail

If the FC asked you to change autopilot settings to 'shorter' or 'prefer less secure', make sure you change it back to your preferred setting (normally 'prefer safer').

Leave the Mumble fleet operation channel, move yourself to the Combat Lounge or the Chat Lounge. Leave the fleet only after docking. Leave your squad chat channel.

The FC will sometimes write a report in the After Action Report forum.