Difference between revisions of "User:John Silverfox"

John Silverfox is an active pilot in New Eden and within EVE University. When not busy managing assets planet-side, he prefers the more peaceful zen activity of harvesting moon juice and obese rocks. Not only does he find this activity relaxing, but it also provides ample time to enjoy a tasty meal of ramen noodles. John often spends his time in command either gazing the the beauty that is New Eden or participating in mining operations throughout known space. 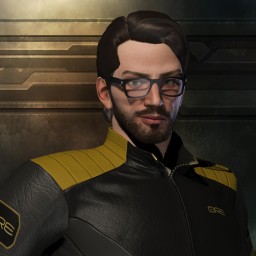 John started his capsuleer life on December 10, YC120 and joined EVE University later that month on December 29, YC120. After acceptance to the university he promptly joined the Amarr Mining Campus as it allowed him to continue ongoing studies in computer science concurrently. An Eagle Scout, John was excited to be a leader in his class, providing knowledge from both the university and his personal experience to new capsuleers. An eager, hands-on learner, John set aside mining barges he had collected and quickly invested in new mining foreman platforms such as the Porpoise and larger Orca, what he is currently mastering.

John also has a background in rudimentary mechanical engineering. He has built a few machines out of old FIRST Robotics skeletal remains, and turned them into what some would call... a battle bot. John is no longer allowed inside his local engineering lab without adult supervision.

John enjoys Military History. Often he can be found playing war games on his personal computer, and even the relic table top game Command Decision. He has always had a passion for science fiction, his favorite film being the 42nd remake of Wrath of Khan. John does his best to maintain physical strength, be it simple workouts or cross-fit.

There are 12 principles a Boy Scout lives by which is actually considered the Scout Law. "A Scout is trustworthy, loyal, helpful, friendly, courteous, kind, obedient, cheerful, thrifty, brave, clean, and reverent." All leaders must have and live by a set of values. An Eagle Scout since YC114, John takes these values very seriously.

The Hyperion Project is something Taako Salso and I have been working on, The Hyperion Project. It is a place where we can share our scans of moons throughout New Eden, great for those of you who are looking into moon mining but don't have time to scan every single moon. Right now it is only available to university members. Scans supported are those from survey scanner probes, as well as DScan. Just copy and paste directly from the game into the scan submission field. Everything will be done for you! Forum Post

I may or may not be working on the following pages. This section is really for my quick reference; feel free to assist!