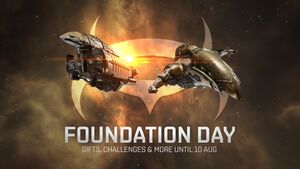 Amarr Foundation Day (alternatively Foundation Day[note 1]) was a limited time event that ran between 7-10 August 2020, downtime to downtime. During this period, capsuleers could log in to earn fireworks, and SKINs for the Amarr Shuttle and Sigil. Omega clones could also collect 35k Skill Points and Amarr-themed clothing. This event featured celebrations in select systems of Amarr Empire high security space, and overlapped with a 3v3 Imperial Navy Slicer Abyssal Proving Grounds event.

Capsuleers could log in for all three days within the event to collect all the rewards.

The reward setup is similar to the Federation Day and Minmatar Liberation Day events that were run during the two months prior to this event.

During the event, special event beacons with an Amarr fleet spawned. They were named after the titan of the fleet, and appeared as a beacon in space as "TES <titan name> Parade". New to the celebration events, each celebration fleet featured distinct liveries, corresponding to the house of the system they were based in (Jamyl the Liberator's fleet in Amarr had golden skins).

The systems where parades will take place are:

On 8 August 2020, following downtime, all pilots were given a task to shoot fireworks at a specific one of the titans listed. Pilots received 5k SP directly for their efforts. 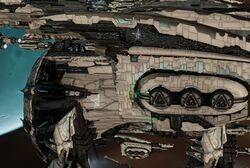 "Half-Star" decals on the Kor-Azor fleet.

Some fleets had a special "half-star" decal on the sides of dreadnoughts and titans. These seemed to be used on the fleets with liveries that had not yet been introduced as SKINs. No direct or lore explanation was given for these symbols.