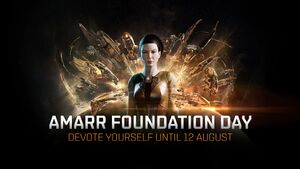 Amarr Foundation Day is a limited-time event that takes place from 5th to 12th August 2021, downtime to downtime. During this period, capsuleers can log in to earn fireworks and SKINs. This event features celebrations in select systems of Amarr Empire high security space.

These sites mimic the behavior of the new Ressource War sites from the Stargate Trailblazers event and take place in these constellations:

The 4-player Omen FFA runs from 6 August to 10 August. Modules will be limited to meta 4 and below meaning no Tech 2 modules. You will not be able to use any specific resistance hardeners on your ships. This includes anti-EM and anti-thermal rigs as well as their equivalent modules.

During the event, special event beacons with an Amarr fleet spawned. They were named after the titan of the fleet, and appeared as a beacon in space as "TES <titan name> Parade". New to the celebration events, each celebration fleet featured distinct liveries, corresponding to the house of the system they were based in (Jamyl the Liberator's fleet in Amarr had golden skins).

The systems where parades will take place are:

During the event, a special Federation Day warp speed bonus of 2 AU/s is applied to all ships in Amarr Empire space.