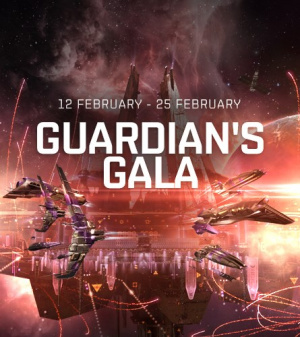 The description, from the EVE Game Events site:

The return of the Guardian's Gala presents new and exciting challenges, visuals and content! Enjoy exclusive rewards such as the rare Domination, Shadow Serpentis and Deadspace modules, Spirit SKINs, new Facial Augmentations, Inquest Hedone and Eros implants as well as Boosters and Cerebral Accelerators. Get them from the Agency reward track or by trading in specified items at special Paradise Club structures for Guardian's Gala Surprise Gifts featuring exclusive rewards! The notorious Angel Cartel and Serpentis pirate factions are once again conducting their annual celebrations, so Capsuleers are urged to crash the party and share the spoils!

All the rats below deal explosive and kinetic damage. Their resists are 0% explosive, 20% kinetic, 50% thermal, and 60% EM. Follow the links for exact stats:

Eventually the boss battleship will also warp in. The boss is either a bettlecruiser or a battleshp.

At the center of the site lies the Paradise Club.
Open the "container" (right click and choose "access") and a menu will open. In here you can exchange one ticket, 5x Tricarboxyls and 25 million ISK for a random reward.

This variant has spawns either Khaitetha's Nidhoggur or Otuwiri's Thanatos in the end. The Thanatos does not share the resist profile of the other rats is weakest to kinetic/thermal as it's usual for Serpentis.

The Nidhoggur has 1111 HP/s peak raw passive shield regen (more EHP/s against non EX damage due to resists). You need more than this ammount dps to beak its tank. The Thanatos has only 222 HP/s passive shield tank so you can slowly kill it even with a weaker ship.

The event sites contain Amethystic Crystallite asteroids which can be mined for their ore. Each site has been reported to have approximately 2500 units (7500 m3) of ore.

Amethystic Crystallite can be reprocessed into Chromodynamic Tricarboxyls at rate of 1000 units of ore (3000 m3) for 2 units of Tricarboxyl. Of which half is wasted due to reprocessing efficiency. The reprocessing yield can be improved by Veldspar Processing.

Chromodynamic Tricarboxyls is needed for cerebral booster manufacturing and to receive the random reward from Paradise Club.

The event also has challenges that will reward you with points and other items.

There are also time-limited challenges, which have a limited time to complete regardless of whether you progressed on it or not.

You will unlock rewards at certain milestones.

In the first few hours, the battleship was doing over 3,000 DPS due to its rate of fire being misconfigured. It was eventually fixed, and people who lost ships to it received reimbursements.

The event mineral yield per m³ is 5x lower per than in Operation Permafrost, which in turn was 2x lower than in Crimson Harvest (2018).

Some people are also experiencing issues with new challenges not appearing after old ones are completed.

Forum thread on the non-respawning challenges