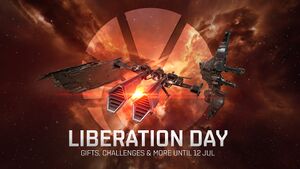 Liberation Day (alternatively Minmatar Liberation Day[note 1]) was a limited time event running between 10-13 July 2020, downtime to downtime. During this period, capsuleers could log in to earn fireworks, and SKINs for the Minmatar Shuttle and Wreathe. Omega clones could also collect 35k Skill Points and Minmatar-themed clothing. This event featured celebrations in select systems of Minmatar Republic high security space.

Users could log in for all three days within the event to collect all the rewards.

The reward setup is similar to the Federation Day event a month before. 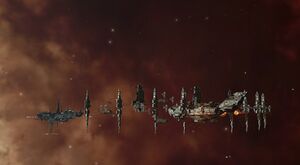 During the event, special event beacons with a Minmatar fleet (composed of static structures of various Minmatar ships) were spawned. They were named after the titan of the fleet, and appeared as a beacon in space as "RFS <titan name> Liberation Parade".

The systems where parades took place (alongside the titan name and in-system location) were:

On 11 July 2020, all pilots were given a task to shoot fireworks at a predetermined titan among the listed locations. Pilots received 5k SP directly for their efforts.