This article details the 2021 variant of this event. For other variants, see Federation Grand Prix (disambiguation). 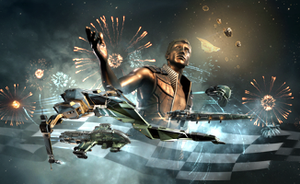 The Federation Grand Prix was a recurring ingame event that challenged capsuleers to warp from point to point in the least amount of time. In 2021 it ran from March 11th to March 23rd.

The Federation Grand Prix is split into three routes: South, East, and North. Each route has low security systems, with the Northern route having a null security section when flying "Prefer Shorter" (unless you want to take a very long route through low sec Aridia). The tables below will use "Prefer Shorter", totalling 233 jumps.

Each site you arrive at will award you one point, after gaining the required amount of points you can claim the reward from the Federation Grand Prix window in The Agency and it will be placed in your redeem queue.

After completing the routes once players can run them again to compete in time trials. Each of the three routes has its own leaderboard in the competition.

Capsuleers will be ranked by time for each route and awarded points based on that rank. The 10 capsuleers with the highest total points will be awarded Omega time and Federal Police SKINs. All other players who competed in the Extra Lap time trials will have their names memorialized on a monument.

It is possible to pass on the extra lap by letting the task time out. Doing this will move the player to the beginning of the next route. This allows targeting times on specific route.