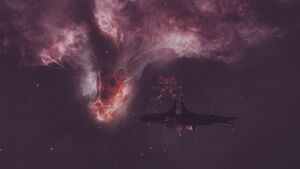 The unique enviroment of the event site.

The event consists of combat sites scattered around all areas of New Eden.

There are two different types of sites in the event: Normal sites that appear in normal space and a different site that appears in wormhole space.

The site appears as a combat anomaly in the probe scanner. Once someone initiates warpin to the site it will also appear as a beacon in the overview.

Kiting is not viable strategy. The rats will catch any ship in the site. Even the EWAR rats that have very long range will get on top of their target even if they wouldn't need to do that. All ships orbit at 20 km or less from their target.

This site is runnable with a ship that can face tank at least around 500 dps. Bring some extra capacitor to counter neuts.

This site is found only in wormholes.

Rats in the site drop various items. The Emcee batteship is not the only ship that can drop items of interest but it has the highest drop rate and best drops.

The normal site can drop:

The VIP site can drop all above and additionally: