Event combat anomalies spawn in all areas of space. The easier sites spawn in high/low/null security space while wormhole space spawns harder sites. The combat sites will appear as a warpable beacon on overview once someone has initiated warp to it.

The rats in the site use combination of target painters, sensor dampeners, stasis webifiers, energy neutralizers, warp disruptors and warp scramblers. The rats will also use warp bounces to get on top of their target making kiting practically impossible.

The rats orbit their target at 5-30 km range. The rats will also prioritize killing drones.

All rats can drop valuables such as SKINs and agency drugs. The boss ship will also drop Overseer's Personal Effects.

This site spawns in normal space.

Event data sites spawn in normal and wormhole space. There are two types of event sites. 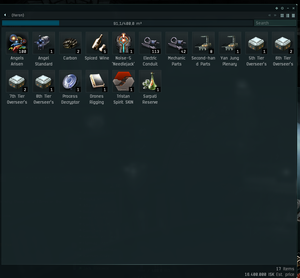 Example loot of a site (all six cans) in high security space.

This combat anomaly spawns in wormhole space. It consists of a single ungated normal space pocket.

Capsuleers must have logged in for 7 out of the 12 days to collect all rewards. A total of 80k Skill Points were available to Alpha clone accounts, while Omega clone accounts had access to an additional 250k SP (plus up to ~17k SP from the accelerator).