There are two different ways of playing EVE:

In-game this system is referred to as Clone States. Characters on Alpha accounts are referred to as "Alpha clones", and characters on Omega accounts are referred to as "Omega clones". If you pay for a subscription (paid for with time cards, monthly payments, PLEX...), your account (and all the characters on that account) receive "Omega" status until your subscription runs out (or you cancel it), at which point they revert back to "Alpha" status. There is no way to tell an Alpha from an Omega clone in-game. The conversion from Alpha to Omega is immediate, while the conversion from Omega to Alpha will always happen when you next log into the game.

If an Omega clone is downgraded to an Alpha clone (because the account's subscription has run out), any skills that character has trained which are not part of the Alpha skill set are locked and become inactive, i.e. they cannot be used, but the invested skill points will not be lost. Any items or ships which require the locked skill become inactive and cannot be used, and the skill training queue will be paused (but can be resumed by logging into the game). If the account's subscription is renewed, then the character is automatically upgraded back to an Omega clone and can once again use all the skills they have previously trained.

Alpha or Omega status is tied to your game account. If you have multiple accounts, then you can choose to pay for a subscription for some, all or none of them, and each account (and the characters on that account) will have the corresponding Alpha or Omega state.

Compared with Omega characters, Alpha characters are limited in the following ways: 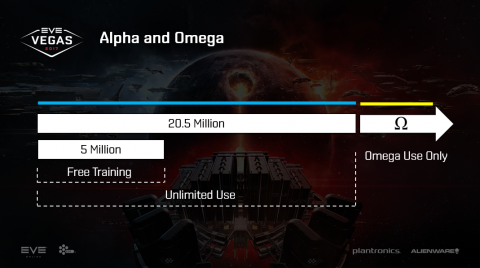 The set of skills that Alpha characters may train limits them to:

Expand the table below to see which skills you can train as an Alpha, and to what maximum level. For a list of skills you start the game with, see starting skills.

While they are well suited for getting introduced to EVE Online, Alpha characters should be seen more as an "indefinite trial" rather than as a "free-to-play" option.

Alpha characters are perfectly viable in low-level PvP and PvE, and in support roles in larger-scale PvP (such as EWAR or tackle for a fleet). However, their performance will not be on par with Omega characters once the latter has trained the skills to start using Tech 2 modules and ships.

Alpha characters can mine (ore or gas) in a Venture (but not use more advanced mining ships), and can perform basic (only Tech 1, no invention) manufacturing. While they will not be as efficient as an Omega character (who have access to more advanced ships and skills which improve mining and manufacturing efficiency, and are not subject to the addition 2% tax levied on Alpha characters), they can nonetheless participate in basic industry. They can salvage wrecks, but they cannot, however, do Planetary Industry.

Alpha characters can trade, but they will pay higher taxes on their transactions and have fewer options at their disposal (e.g. they can only sell items located within 5 jumps, whereas an Omega character has the option to train skills allowing them to sell items anywhere in the current region). Alphas can have 1 active contract at a time (i.e. they can create 1 contract, but have to wait for it to be fulfilled before creating another), but they can accept contracts.

Basic hauling is an option for Alpha characters as they have access to haulers.

Alpha characters can do basic exploration.

Omega clones may use any skill, ship and item in the game. Additionally, you may log into the game with more than one account at a time (multiboxing), but only as long as all the accounts being logged in have Omega status.