Skillers in the Abyss 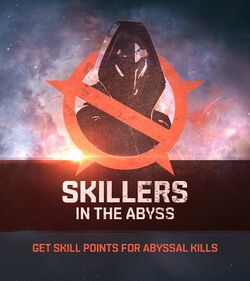 Skillers in the Abyss is a limited time event, running from 28 April to 11 May 2020. For the duration of the event, players are given three challenges each day to kill a certain number of Abyssal Deadspace rats for Skill Points. Challenges can be to kill 5, 10, or 15 of a particular category of rats for 5k, 10k, and 25k Skill Points, respectively. The challenges reset at downtime.

The rat categories are:

The event was initially announced to end on the 4th of May. Following reports of issues with rat kills not counting towards challenges[3] and server connectivity issues, the event was extended by a week to the 11th of May. This change meant that the bonus SP gained from two weeks of this event was put closer to the initial one week with the higher listed rewards.

Further connectivity issues stemming from DDOS attacks on the 3rd of May[4] lead to the loss of numerous ships in Abyssal Deadspace (as chronicled in this eight second video), and the loss of Omega status for some characters. In response, CCP reimbursed ships lost during "high impact periods"[5], and announced an extended downtime on the 8th of May - estimated to be four hours - to fortify the server against DDOS attacks.[6]