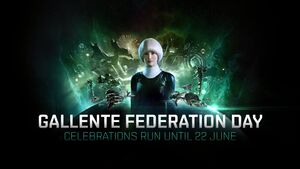 Federation Day is a limited time event between 15-22 June 2021, downtime to downtime. During this period, capsuleers can log in to earn fireworks, and SKINs for the Gallente Shuttle and Iteron Mark V. Omega clones can also collect 15k Skill Points and Gallente-themed clothing. This event also coincided with celebrations in select systems of Gallente Federation high security space, where capsuleers can launch fireworks for skill points.

Additionally to last year's event, there is the debut of new monuments, a themed Abyssal Proving Grounds, and Mining Blitz sites.

Users can log in for five of seven days within the event to collect all the rewards. 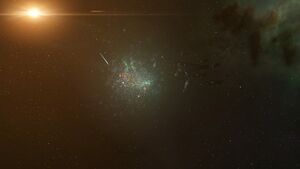 Capsuleers celebrating with fireworks in Luminaire

During the event, special event beacons with a Gallente fleet (composed of static structures of various gallente ships) are spawned. They are named after the titan of the fleet, and appear as a beacon in space as "FNS <titan name> Parade".

The systems where parades take place (alongside the titan/beacon name and in-system location) are:

Every day, the capsuleers are challenged to visit one of the Systems and fire a firework at the present Titan to gain 5,000 Skillpoints.

The new monuments introduced include the Battle of Iyen-Oursta Monument, the Kabar Terraforming Installation (Mannar VIII), and the Reschard V Disaster Memorial.

During the event, a special Federation Day warp speed bonus of 2 AU/s is applied to all ships in Gallente Federation space.