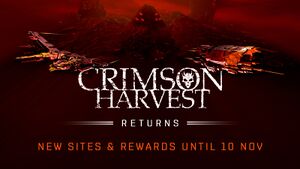 Crimson Harvest is a recurring event involving the Blood Raiders pirate faction and the Shining Flame mercenaries. In 2020, the event ran from October 29th through to November 10th, downtime to downtime, and was announced as part of EVE's Halloween Horrors. The event merged the traditional Crimson Harvest event site and rewards with a higher loot drop from PvP and structure losses (90% instead of 50%) and special wreck icons from the Trick or Treat event from the year before. The event ran ran concurrently with a Blood Raiders themed Abyssal Proving Grounds event from October 30th through November 3rd, featuring double web range.

Starting a day after the event, on 30 October, capsuleers had 11 days to collect 7 days of rewards. The event rewarded up to 60k Skill Points for Alpha clones, and 235k Skill Points for Omega clones (plus up to 17.28k SP from the cerebral accelerator).

If a capsuleer is present at the Crimson Gauntlet it will appear in the Overview of every capsuleer in the same System.

Shining Flame Base appears during the recurring Crimson Harvest event.

When a Capsuleer initiates warp to a Shining Flame Base, the site will appear as a warpable Beacon on the Overview of every capsuleer in the same System.

Enemy ships can warp out to on-grid tactical pings, then warp down directly to their target. (Within roughly 20km of them.)

Second wave spawns about 15 seconds after clearing the first wave.

Second wave spawns about 15 seconds after clearing the first wave.