There are four different damage types in EVE:

All weapons in EVE do at least one (often two) of these damage types, and every ship has different resistances against each. Understanding damage types helps you to survive longer and deal more damage to enemy ships:

Some points to note: 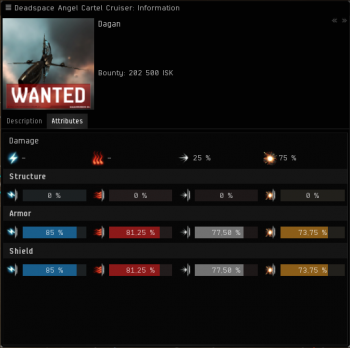 Attibute tab of the NPC Dagan which you have to fight in the SoE mission Our Man Dagan. You can see that he is weakest to explosive. Thus you would try to deal explosive damage. Because he deals explosive and kinetic, you would usually try fit resists against those. But in this case most try to avoid taking damage by orbiting close in an AB fit destroyer.

Just like player ships, NPCs have different resistances for different damage types. However, NPCs tend to ignore the native resistance conventions of shields and armor, and instead have damage resistances which are specific to their faction. If you are running missions or ratting, it is helpful to know towards which damage the NPCs are weak and what damage they deal. This way you can can fit your ship accordingly and maximise your effectiveness against your chosen targets. You can see the resistances and damage types dealt in the attribute tab of an NPC if you open its info window.

In general, all NPCs from a certain faction have similar damage profiles, making them much more predictable than player ships. Additionally, each faction only uses particular types of electronic warfare; this is also noted in the table below. Ship fitting tools like PYFA can simulate combat against rats of different factions, giving you even more fine-grained control over your fit. Please note that a few special NPCs don't follow the pattern of their faction.