The Triglavian Collective are a faction introduced in the “Into the Abyss” expansion (May 2018). They can be found in a new type of space providing a unique solo PVE timed encounters in a special area of space and exotic new technologies, including their very own ships and new weapon system. Further expansions have seen the Collective wage an invasion on New Eden, and seen their technology applied to specialized filaments and mutated abyssal modules.

While the "Into the Abyss" expansion adds a number of other changes, this new Triglavian faction is the primary focus of this page, with the related Abyssal Deadspace complexes on top.

The core source of most of the Triglavian content is the Abyssal Deadspace complexes, which are unique complexes in a separate and isolated area of space for which only one person can participate in at a time. These sites are the source for the BPCs used to build Triglavian ships, also called Precursor vessels; these sites also provide "keys" to access other complexes, blueprints for Entropic Disintegrator modules, Abyssal Deadspace modifier items and some apparel items.

Precursor vessels are the only ships that can use the Entropic Disintegrator modules which have a different setup than the conventional weapon systems most EVE players are familiar with. They focus on an armor tank with emphasis on utility; much like the Society of Conscious Thought vessels, these hulls tend to be somewhat mediocre but can excel in very specific situations. They are specifically equipped to use the Entropic Disintegrator weapon system: all of the hulls have only one turret slot yet have two or more utility high slots, possibly to synergize with the remote armor repair bonuses on each hull. Entropic Disintegrators are a curious weapon system which has some parallels to laser systems, with an interesting but rather specific attribute whereby the damage modifier of the weapon system increases with each shot fired.

Abyssal Mutaplasmids are special modifier elements which are designed to modify certain attributes of select modules. An example would be a Microwarpdrive: the mutaplasmid can boost or decrease the velocity bonus, the powergrid requirement, the signature radius modifier or the activation cost. This allows for interesting concepts in ship choices but also threatens the stability of the module metagame.

Further details on each of these concepts will be explored below.

The Triglavian Collective is a new faction that appeared in New Eden in early YC120. Fleets were following heavily damaged and incapacitated Drifter Fleets appeared around several locations around New Eden it was discovered that those fleets were engaged by a faction that was not known before. Data vaults salvaged from those damaged drifter fleets and Arataka Research Consortium managed to salvage data from those corrupted trinary data vaults that have video footage that shows that unknown faction, named as "Triglavian Collective" engaging Drifter Fleet with an exotic weapon system. One of their Battleship class hulls was also captured by CONCORD and further research was conducted to reveal more about those new faction. It was suggested that the Triglavian Collective is a formation of three entities. Those entities are Perun Clade [CLPER] (PERUN), Veles Clade [CLVEL] (VELES), and Svarog Clade [CLSVA] (SVAROG). The three together are represented by the The Convocation of Triglav, which acts as the liason between the Collective and the outside world.

The Scope Video : The Scope - The Triglavian Collective Revealed

Abyssal Deadspace is a special area of space disconnected from conventional Known Space (K-space) and wormhole space (W-space). Players use special Filaments which are like "keys" to access such areas of space, and have a limited amount of time and face special challenges to complete these sectors of space and survive.

The Triglavian Invasion of empire space has been underway since May 2019. The invasion so far consisted of three chapters, with the current third one being described as the finale.

Initially, in Chapters 1 & 2, the invasions took a similar structure to Sansha Incursions, with a foothold system in high or low (in Chapter 2) security space declared and all systems within two jumps invaded for a limited time, special combat sites consisting of waves of Triglavian rats that awarded ISK and LP (DED) to participants upon completion, and systemwide effects that intensified the closer a system was to the foothold. They varied in many ways from Incursions though, even at this point. Triglavians established gatecamps and roaming fleets, even in high security space, and roaming fleets could invade capsuleer fleets in the Invasion sites. Further, unlike Incursions, where most of the value is in direct ISK payouts, value from Invasion sites are split between direct ISK payments and loot/salvage drops from the rats. Chapter 2 saw the introduction of the Operation Flashpoint site, which allowed capsuleers to aid either the local empire or the Collective.

Chapter 3 saw a major departure from previous chapters, with the Collective now vying for direct control of systems from the empires, which in response saw the formation of EDENCOM. While the same general combat sites remained, they were revamped, and Invasions took place in single systems rather than a foothold system + two jumps. Capsuleers could choose to either support the Triglavian Collective or EDENCOM, and their influence through fighting the other side could determine whether a system was permanently secured from the Invasion, or if the Collective took full control of the system, seeing CONCORD abandon the system and the system's security effectively reduced to null. The Triglavians have been mutating blue and bright yellow stars in systems under their full control for yet unknown ends.

The result of the third invasion chapter was the forming of Pochven region. A separate detached region controlled by the Triglavian Collective. Systems that are close to the previous locations of the systems which Triglavians conquered can spawn wormhole connections to Pochven. Systems with connection to Pochven have roaming Triglavian rats which are aggressive to all players who do not have positive Triglavian standings.

The randomly appearing wormholes can turn normally safe system into dangerous territory where strong NPC rats appear without any warning and kill players. To avoid the frustation of this game mechanic it is strongly recommended to get positive standings with with Triglavians. How to do this is described in guide: Getting positive Triglavian and EDENCOM standings.

Starting in May 2020, the Triglavian Collective have disseminated a special form of filaments dedicated exclusively to PvP proving grounds. The area, which was previously exclusive to Cruisers in Abyssal Deadspace, and requires the completion of the PvE components of Abyssal Deadspace (>T3) pockets to have the chance of entering, is now open to other ship classes, and without the PvE requirement. The proving grounds have taken the form of limited time events, with the top 100 players with the most wins in each getting a set of rewards, including ISK, SP, filaments for future proving grounds events, and exclusive SKINs.

At least nine events will take place[1]. The formats that have taken place and been announced so far are[1][2]:

Ships from the Triglavian Collective are called 'precursor' ships. The ships are centred around their single Entropic Disintegrator turret, a weapon dealing Thermal and Explosive damage, increasing in power the longer it stays active on a single target, but limited by a fixed maximum range and no falloff. To accompany their single gun, Triglavian ships come with bonuses to Energy Neutralizers, Remote Armor Repairers, and Smartbombs, giving their ships surprising amounts of support and utility potential. The ships favour armor tank through their slot layout and base buffer amount. Further, Triglavian ships are unusually low-mass.

Each T2 hull was created by one of the four empires integrating their own technology with Triglavian designs; the Nergal was made by the Gallente, the Draugur by the Minmatar, the Ikitursa by the Caldari, and the Zarmazd by the Amarr. The special-edition Hydra and Tiamat were both designed by the Society of Conscious Thought.

There are no blueprint originals for Triglavian items, nor are there Loyalty Point stores that sell them. In stead, blueprint copies for Tech I ships, weapons, and munitions must be acquired in Abyssal Deadspace. The special materials required to build them (Zero-Point Condensate and Crystallized Isogen-10) are also found in Abyssal Deadspace. Blueprint copies for Tech II ships, weapons, and munitions must be invented. Materials to construct Tech 2 Precursor ships can be acquired by salvaging precursor ships destroyed during Invasions. Blueprint copies, materials, and skillbooks to build and fly the Zirnitra can be found in Observatory Flashpoint sites during Invasions. 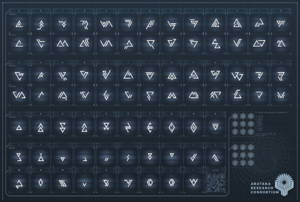 A translation fontsheet of the Triglavian font by the Arataka Research Consortium.

The Triglavians utilize a special font (triglavian), which features on their ships and official communications.