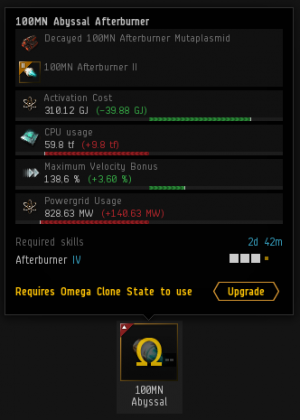 Tooltip of an abyssal module, showing the original module and mutaplasmid, the attributes which were modified, and how great the modifications were

symbol at the corner of the module icon. 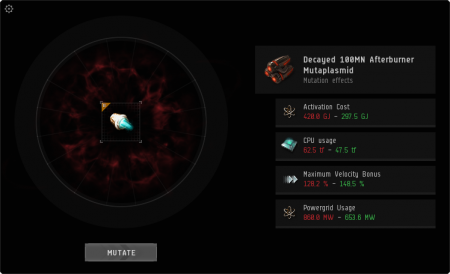 The abyssal module creation window will show the possible range for modified stats. Hovering over the module slot will show what modules are compatible with this mutaplasmid.

Two items are required to create an abyssal module: a Mutaplasmid, and another module which is compatible with that mutaplasmid. The module used can be of any tech or meta level, and will determine the resulting abyssal module's base stats.

Mutaplasmids are acquired either from Triglavian Bioadaptive Caches found in Abyssal Deadspace, or in the wrecks of Invading Precursors found in Triglavian Invasion systems. Each mutaplasmid comes in three strengths: decayed, gravid and unstable.

To create (or "Roll" as it is often said) the abyssal module, either double-click on, or right-click and Use the mutaplasmid. This will open a window with a slot that can accept a module. Drag and drop the chosen module into the slot, or hover over the slot to view a list of all compatible modules. (Modules in that list which are in the same hangar as the mutaplasmid are highlighted and can be selected from the list.) The right side of the window will then display a list of the possible stat changes the module can receive. At this point, pressing the Mutate button will combine the module and mutaplasmid to create a new abyssal module, and the window will display the module's newly adjusted stats.

Mutating a module can only be done once, and cannot be un-done. Once mutated, the new module is a unique Abyssal module, and cannot be repackaged or sold on the market (although it can be Reprocessed into the minerals of a T1 variant). Abyssal modules can, however, be traded via Contracts, and the Contract window specifically allows for viewing the stats of mutated modules by hovering the mouse over the contract. There are also out-of-game websites and servers, such as mutaplasmid.space, which allow for better searching and comparing available contracts for abyssal modules. This all also means that Abyssal modules have no inherent ISK value, and so for any killmails which include Abyssal modules there is no good way of knowing how strong, weak, cheap, or valuable those modules were.

Multiple modules cannot be mutated simultaneously, however if there are multiple available mutaplasmids of the same type the mutation window will give the option to immediately use another.

The table below lists different types of mutaplasmids and what stats each mutaplasmid modifies.