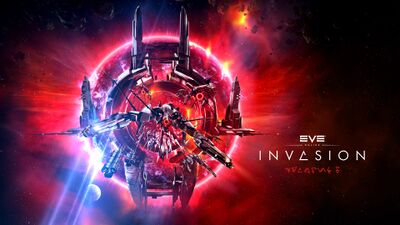 Triglavian Invasions were originally introduced as a new type of PvE content in the Invasion update in May 2019. The new content saw the Triglavian Collective taking over constellations of known space, and sending out patrols in these systems that attacked capsuleers, with the four empires and CONCORD unifying their defense initiative under the newly formed EDENCOM. The third chapter came out in May 2020, one year after chapter 1 began.

The invaded systems had roaming fleets of EDENCOM and Triglavian ships trying to establish superiority. These ships were present on gates, stations, in asteroid belts and in safe spots in space. They were also present in a number of Triglavian invasion combat anomalies only present in the invaded systems. Systems could be secured for either EDENCOM or the Triglavian Collective through fighting the opposite faction.

The Triglavian Collective's goals were initially unknown. Systems with blue or certain yellow stars captured by the Triglavians were abandoned by CONCORD, and had large Triglavian Porevitium Transmuter installed around the star, transmuting them to a dark red color. Towards the end of the Invasion, said stars also started exhibiting Wormhole-esque animations.

Chapter 3 concluded on October 13th, 2020, with the 27 Final Liminality systems captured by the Triglavians torn from the regular gate network and reformed together as the region of Pochven. The Invasion tab was subsequently removed from The Agency and replaced with a link to the Corporation dashboard. As of October 13th, former Minor Victory systems maintain EDENCOM or Triglavian presence as they did during the Invasion, but are not marked on the route planner or in system. 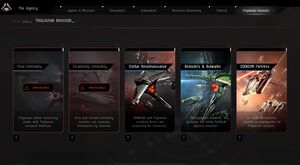 This is the Agency Tab for the Triglavian Invasion Chapter 3

To help either side, capsuleers had to engage and destroy either the Triglavian NPCs or the EDENCOM NPCs. These could be found primarily in combat anomalies or in safespots that had to be scanned down. They could also be found on stargates, in asteroid belts and at stations.

It can as such essentially be seen as a tug-of-war between the opposing sides:

Both EDENCOM and Triglavian ships could appear in cosmic signatures, caution was recommended if doing exploration in an invaded system.

For systems without blue or yellow stars, player influence could only push the system into a Minor Victory status for EDENCOM or the Triglavians. At either victory stage, the system would no longer appear in The Agency, but would still impart system-wide effects based on the victor's observatory or locus. For these systems, the tug-of-war is instead:

Minor victory systems still spawned invasion sites for both sides (more for the winning side) and roaming fleets of the winning side will be present. The winning side may also deploy sentry towers (EDENCOM Gunstars or Entropic Disintegrator Werposts) in the system.

Forces for the Triglavian Collective and the EDENCOM could be found throughout systems undergoing invasion.

The Triglavian Collective ships came in all sizes, from frigates, destroyers, cruisers, battlecruisers and battleships, with even Dreadnoughts being a rare sight in the advanced phases of the invasion.

There also existed "Raznaborg <ship type>" with no secondary prefix. These ships had the abilities of Raznaborg Liminal <ship type>s.

With the three tiers, many hull-sizes and ewar-types, the Triglavian forces found could come in many variations.

As either the Triglavian or EDENCOM progressed towards the next phase, other sites such as the Minor Conduits and Stellar Fleet Deployment Sites appeared.

Stellar Reconnaissance. The bar must be filled completely to move to the next phase.

Scouting forces belonging to both EDENCOM and the Triglavian Collective are conducting recon operations focused on the central star of this system but roaming widely across the system. Both sides are seeking to establish stellar observatory structures.

The Stellar Reconnaissance was the first phase a system can be in, in the 3rd chapter of the Triglavian Invasion. In this phase, neither EDENCOM nor the Triglavian Collective had the upper hand, but capsuleers could join either side and help them establish a foothold. If either side succeeded in winning this phase, an industrial ship would spawn to anchor a Stellar Observatory Structure. The two sides then had to help either defeat or protect this industrial ship. If the anchoring was successful the system then escalated towards the next phase, being either a Redoubt or First Liminality.

Should the EDENCOM forces manage to win the opening phase of a Triglavian invasion, it moved the system to the Redoubt & Bulwarks phase. Like the Escalating Liminality phase, this could further be divided up into two phases:

Ingame UI showing the progress on a EDENCOM Redoubt.

This system has been fortified by EDENCOM to the degree that is serves as a redoubt against Triglavian invasion operations. The Triglavian Collective will continue to strike against EDENCOM targets in this system.

When a Stellar Reconnaissance system is won by the EDENCOM side, it escalated into the Redoubt phase. Here EDENCOM has the upper hand, but the Triglavian side could still easily turn the tide. The system would experience a system-wide effect, as well as harder combat anomalies.

Should the EDENCOM forces achieve victory in this phase, it would further escalate into the Bulwark phase.

This system has been fortified by EDENCOM to the degree that is serves as a formidable bulwark from which Triglavian invasion operations can be resisted. The Triglavian Collective will continue to strike against EDENCOM targets in this system.

The invasion had not yet failed for the Triglavian and a concerted effort can manage to turn the tide, at the same time the EDENCOM forces have not yet won final victory and must remain vigilant. Should the EDENCOM forces manage to win this phase, a Triglavian Dreadnought will spawn which must be destroyed. When this is done the system is turned into a EDENCOM Fortress.

The ingame UI for the EDENCOM Fortress

This system has been fortified by EDENCOM to the point that it is now an unbreakable fortress that the Triglavians will find far too hard a target to conquer. Ongoing Triglavian invasion efforts will move to more vulnerable targets.

When the EDENCOM forces manage to exert complete control over a bulwark system it changes it to an EDENCOM Fortress. In this phase the Triglavian Collective deemed the system too hard to conquer and moved their invasion efforts to other systems.

Upon reaching this phase, the EDENCOM side achieved a complete and final victory over the system.

EDENCOM fortress systems do not spawn any invasion sites or Triglavian rats. One fleet of EDENCOM rats will roam the system.

Should the Triglavian forces manage to win a blue or yellow star system, the system moves from the Stellar Reconnaisanse phase to the Escalating Liminality phase.
This phase can further be divided up into two sub-phases:

The presence of Triglavian structures and forces in this system has built up to the point that it constitute a serious danger to the future of the system. EDENCOM forces will continue to strike against Triglavian targets in this system.

When a Stellar Reconnaissance system was won by the Triglavian Collective, it escalated into the First Liminality phase. Here the Triglavians had the upper hand, but the EDENCOM side could still easily turn the tide. The system experienced a system-wide effect, as well as harder combat anomalies and roaming fleets.

Reaching the First Liminality phase reduced the security status of a system by an unknown amount and changed the system to work as low-sec.

The First Liminality further escalated into the Second Liminality phase. In this phase, the Triglavian Collective is close to achieving final victory. EDENCOM must double their efforts or risk losing the system.

Tougher combat anomalies and enemy ships will be present in this system.

This means the system resembles Nullsec regarding CONCORD Response (there is none), Sentry guns (aggressors are not shot) and Security Status (no reduction for aggressors). All other limitations stay as dictated by the systems original security status:

- no cynos, Capital ships taking gates into the system or Micro Jump Field Generators (aka booshs) if the system was originally Hisec

- no Warp Disruption Fields (aka bubbles) or Bombs (not to be confused with Smartbombs) if the system was originally Lowsec or Hisec. 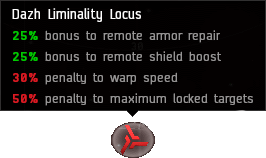 Dazh Liminality Locus is in effect throughout the whole System.

Federal Stellar Observatory is in effect throughout the whole System.

As EDENCOM or the Triglavian Collective gain greater control over the System, the winning side's Industrial ships will begin to appear in the System.

These Industrial ships will attempt to construct a Structure that applies effects to all ships within the System.

The invasion event occured simultaneously on the Tranquility and Serenity servers (chinese EVE server). The progress between the two is synchronized by bringing EDENCOM victories from Serenity to Tranquility in form of Massive EDENCOM Fortifications.

A system that EDENCOM won on Serentiy would become a Massive EDENCOM Fortification on Tranquility. EDENCOM forces would partrol the system and only EDENCOM anomalies spawn. After a few days the system turned into a normal EDENCOM Fortress.

Massive Triglavian Invasion was another way to sync the servers. But since the Triglavians did not win a single system on Serenity[Verify], this state was not observed.

Triglavian and EDENCOM sides both had standings towards capsuleers.

There was a very small range of standings which made both factions neutral. Initially a range of -2.0 to <0.0 standings with the Triglavian Collective, it was later reduced to a very tiny window. The exact values are not known, but it appeared that if your EDENCOM standing is around -0.001 and Triglavian standing is around 0.001, both sides were neutral. Whether this was working as intended is uncertain. 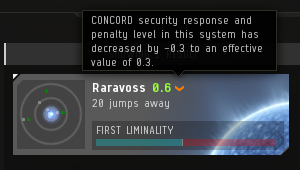 The first system to reach the Escalating Liminality phase. Raravoss changed to effective low-sec during First and Secondary Liminality, dropping to effective null-sec once it reached final liminality.

During the Invasion, CCP stated that, should the Triglavian Collective succeed in their invasion of a system, it would have direct impact on that system and would have lasting consequences in New Eden.

If a system reached the Escalating Liminality phase, it reduces the system security by an unknown amount. This changed a high-sec system to function as low-sec.

When a system reached the Final Liminality phase, the system was abandoned by CONCORD and EDENCOM, and functioned as an empire null-sec system. This meant no CONCORD response, but also no cyno or warp bubbles.

On August 18th, 2020, the Triglavian Collective and supporting capsuleers captured pushed the system of Niarja into Final Liminality, severing the "ring" of high-sec Topology, and taking the two largest trade hubs, Jita and Amarr, from 10 jumps apart to 45.

On October 13th, 2020, following a week of gate energy fluctutations and a day of gate network disruptions, all 27 Final Liminality systems had their gate connections severed, and linked together under a new region of Pochven. All stations were commandeered by the Triglavians, and their original agents removed. Station services and gate traversal require various levels of standing with the Triglavians, rewarding those who helped push the systems into their control. Access to and from the region was introduced through wormholes and special filaments.

The rewards can be divided up into two categories:

Figthing for the EDENCOM forces would reward the capsuleer with ISK and DED loyalty points when a combat anomaly is cleared. Figthing for the Triglavian Collective gave slightly more ISK, but no loyalty points. Both gave a small standing increase with their faction and a standing decrease with the opposing. The standing gain depended on the invasion stage and site. In the reconnaissance phase, standings moved by 0.01% per anomaly, while in First Liminality the standing moved by 0.24% per observatory flashpoint.