At first glance, New Eden is a complex mess of points. In addition to that, jump gates often don't connect to the closest systems. There are many arms and dead ends, and a number of highways - routes that are particularly short for the distance they cover. There are also high sec chokepoints: Systems that you need to pass through in order to travel between two given high sec systems without leaving high sec. Since the ingame map arranges systems by their coordinates, some of these relations can be hard to see, but they are useful to know for pilots in the high-sec trading or hauling businesses.

Topologically, high sec was once a ring that consisted of the systems that are claimed by the four playable racial factions. The Fall of Niarja cut the link (red portion below) between Caldari and Amarr space, so the ring is now broken: 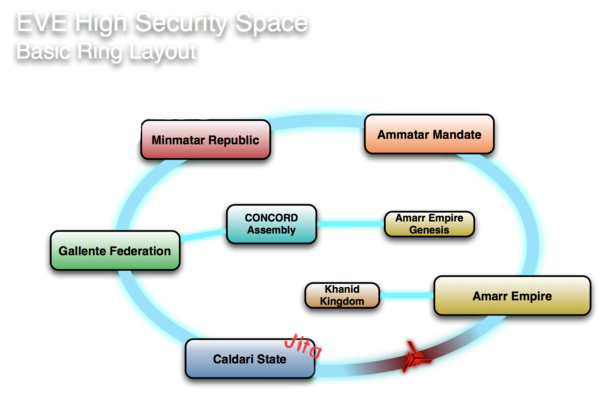 Caveat: Among the minor factions, the Ammatar Mandate is special in that it is also located on the former ring. A small part of the Amarr Empire is separated from the Empire's main high sec space, and only reachable through CONCORD/Gallente space.

The main idea you should take away from this picture is that in order to travel from e.g. Aldrat (in Minmatar space) to Jita (in Caldari space) without leaving high sec, you need to travel through Gallente space. There are shorter routes, but they all involve at least one low sec system.

In addition to resembling a ring, high sec jump routes are also structured so that systems exist that are located directly on the ring as well. This means that in any route between faction spaces that is sufficiently long, there are also individual systems you must pass through if you want to stay in high sec. In the above example (Aldrat-Jita), you need to pass through the Colelie system in order to reach Gallente Federation space, and in order to get from Gallente space to the main Caldari region, you need to pass through the Sivala system between the Caldari Border Zone and the Caldari State region. Likewise, every other high sec trade route between a Minmatar system and a Caldari system also passes through Colelie. Because high sec resembles a ring, there is one alternative path around the other side of that ring (in this case: through Ammatar and Amarr space). This alternative path has similar systems on it, though. Systems like Colelie and Sivala are, therefore, high sec chokepoints. To put it plainly, they are the kind of system where you would hang out if you were in the business of liberating innocent trade goods from their trader oppressors.

Another aspect of the layout of High Sec space is that some routes are much shorter than others. Using the same example as above, the shortest path between Aldrat and Jita passes through the two systems Aufay and Balle. While it isn't necessary to travel through these two systems, by default, the autopilot will choose a path through them for you if you only tell it to avoid low sec. Since people in general are lazy and will either prefer the shortest path or just trust their autopilots blindly, these systems form highways: Routes that see a lot of pass-through traffic even though they are not strictly required to pass through. This makes them almost as good as chokepoints if you are in the liberation business.

Highways and chokepoints also exist outside of the ring. Again using the same example, in order to reach the remainder of Minmatar space from Aldrat (or in order to return to Aldrat), you must pass through the Eygfe system. On the other end of the example route, the systems Urlen and Perimeter are on a popular shortest path between most of Caldari space and Jita. In particular, the Jita gate in Perimeter and the Perimeter gate in Jita are popular destinations for smartbombing battleships as well as for scouts who would like to scan your cargo.

For many years, the most heavily trafficked hisec trade route was the 9-jump route from Jita to Amarr. That route entered and left Amarrian space via the 0.5-sec system, Niarja. The relatively low security rating of the system made it a haven for gankers (and thus the most famous of the hisec chokepoints).

On 16th August, 2020, Niara became targeted by the Triglavian Invasion, and on 18th August, the system fell to the invaders and became first lowsec, then nullsec, with all gates in the system heavily camped by both Triglavian sympathizers and large groups of Triglavian NPC ships. This effectively cut the Jita-Amarr highway, making the route deadly to any ship not able to either enter warp in under two seconds, or exploit a cloaking device to align and warp safely. This also made every map of the trade routes and topology wrong, an issue which is still being incrementally corrected.

On 13th October, 2020, the Triglavian Invasion reached its conclusion, and the 27 Final Liminality systems, including Niarja, were severed from the stargate network and moved into the new Triglavian-controlled Pochven region. With the removal of Niarja from the galactic map, there is now no direct connection at all between Caldari space and Amarr space.

As a result of the fall of Niarja, the safest route between Jita and Amarr is now 44 jumps, in a path stretching all the way around the ring through Minmatar and Gallente space. Fortunately for non-Triglavian sympathizers, when the Bei system was invaded in the week after Niarja, the invaders were repelled and the system became an EDENCOM Minor Victory. (Had Bei fallen, hisec would have been effectively cut in half, with an Amarr-Minmatar half, a Caldari-Gallente half, and no safe routes connecting the two.)

Since traveling along the ring can involve a large number of jumps through high sec, there are numerous routes through low sec that are considerably shorter. Systems on common shortest paths between empire factions form highways in the same way as they do in high sec. These systems also serve as popular entrances to low sec for pilots who wish to travel there. The notorious pirate strongholds Amamake and Rancer are two such systems.

The following map attempts to visualize the entire ring of high sec empire space, including all chokepoints on the ring. Seven chokepoint systems between Lashesi and Esescama that are directly connected to each other have been omitted. Highway systems that are not chokepoints have been included based on their notoriety, and popular destinations and hubs likewise. 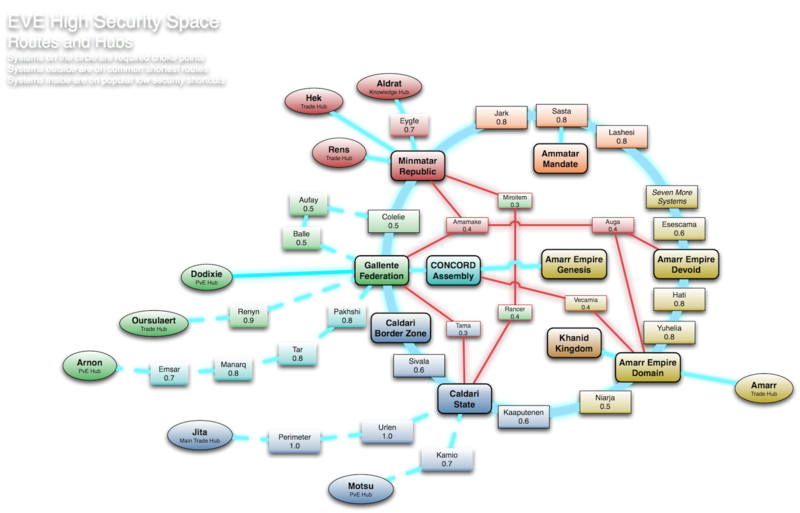 There are high sec systems that have no high sec connection to the main empire region. Several systems in the Molden Heath, Solitude or Aridia regions are examples of this. While these play no large role in the grand scheme of things of high sec life, you should be aware that they exist. It is entirely possible that a courier contract with innocent-looking high sec source and destination systems requires travel through lowsec or nullsec.

You might assume that Lowsec would extend in a contiguous ring, surrounding the High Sec systems. Unfortunately, there is no such Low-Sec Ring. You can however, travel a low-sec pipe from one of the Faction Warfare (FW) areas to the other. The pipe itself is usually not very active for PVP, however there can be interesting solo PVP content. To find the pipe, just go to any FW system and set your destination to a system in the other FW area, prefer Less Secure. For best results, try a route between Kamela and Tama. The resulting route will bring you through many low-sec systems and can be a very profitable and enjoyable roam.

This pipe is along the west side of New Eden. The eastern pipe is broken up by several high-sec jumps, and must be mapped manually.

There are several connections between empire space and null security space. While these connections can be avoided by Jump drive equipped ships, routes to some of them become are trafficked and are often gatecamped.

A map updated for the fall of Niarja, with routes between tradehubs as well as to various nullsec outlets, is displayed below. 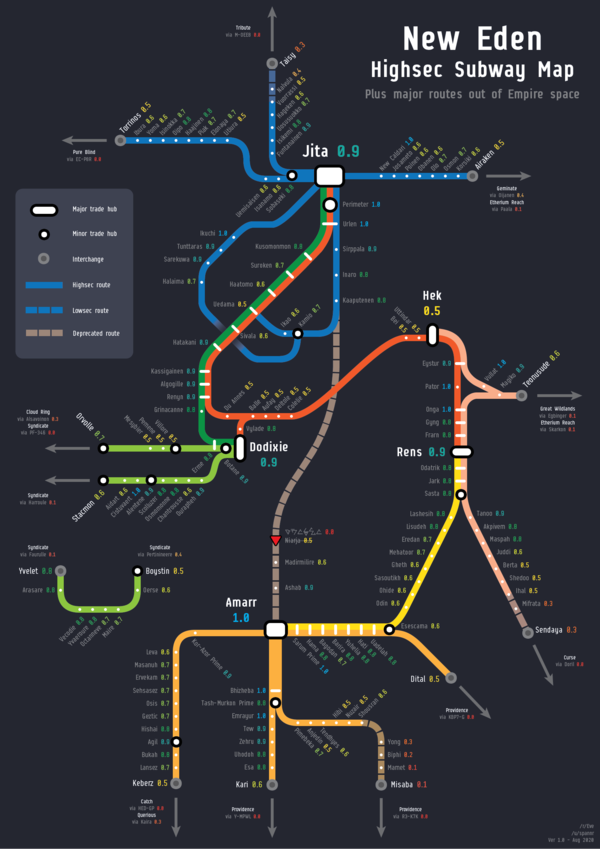